This sketch was included with his notes. 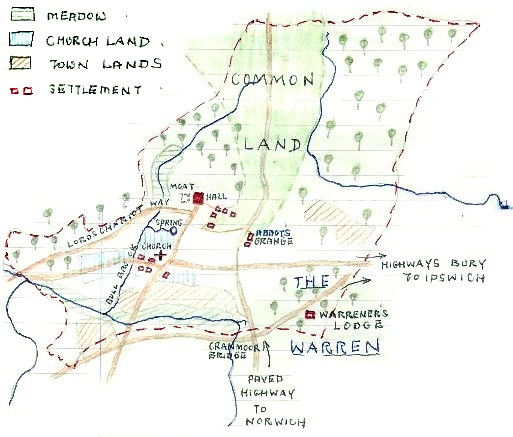 As your own personal research is always the most valuable and the most interesting way of finding out, you should visit the Record Offices at Bury and Ipswich, where the librarians and their assistants are most helpful: Bury St Edmunds – Shire Hall; Ipswich – County Hall, St Helen’s St.

1281
Tithes (one-tenth of the produce of a holding) were allotted to the Abbey Almoner, who at this time was Walter le Aumoner.

1349
In the year of the Black Death (bubonic plague) Elmswell lost 3 rectors. Owing to its close connection with Bury, the plague was carried to the village by the constant flow of visitors, abbey officials and servants. The village was ravaged and survivors moved from around the church (see map, page 7) to higher ground East of Old Hall.

1433 to 1539
The young Henry VI stayed at “Elmeswell” Hall, from the 23rd of January until Lent. His host was Abbot William Currey. “His manor of Elmswell was enriched with canals and an abundance of fish, pike eels, etc. His groves were well stocked with game…”

The large filled in pond close to Hall Cottages could have been one of these ‘canals’ or fish ponds. The surname Piscator crops up in records of this time. The Piscators would be manorial servants with the duty of supplying fish to the Hall, especially on Fridays. (which Mr. Gent of School Road still does, but not to the Hall because it is empty) 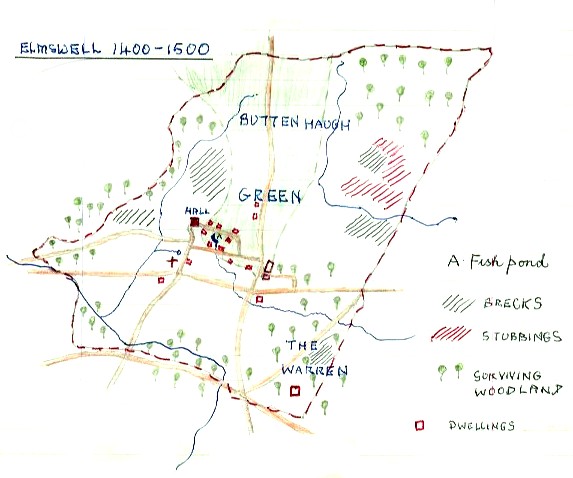