The Royal Flying Corps had a grass landing strip on this site as early as 1918, and before the USAF arrived in mid-1943 the RAF had been using it for training.

Fortunately for the personnel at the airfield, as well as our own village and great Ashfield, there was very little offensive action by the Luftwaffe: on 22nd May 1944 a single Junkers dropped a few small bombs, hitting two hangars and destroying one of the B-17s, and there was a minor incident the following year when a passing enemy plane strafed the airfield.

The last bombing missions were flown in April 1945, and in May the crews were pleased to take part in a more agreeable activity – the dropping of urgently-needed food supplies over Holland.

There is a memorial in Great Ashfield Church, including a record of the 400-plus airmen killed in the operations flown from here.

For an account of the operations in which the 385th took part, see Graham Smith’s book “Suffolk Airfields in the Second World War” (published by Countryside Books of Newbury, Berks.).

More contributions are sought for this important facet of local history.

Newsletter contribution by David Buckton, May 2005
Between sixty and seventy people turned up for our fifth anniversary meeting at the Blackbourne, which also commemorated sixty years since the end of the second world war. Ian McLachlan gave us an impassioned account of the Elmswell-Great Ashfield aerodrome (Station 155) during the last two years of the war, when it was home to the 385th Bombardment Group of the United States Army Air Force: 36 heavy bombers, 400 aircrew, and some 2000 personnel in total, with a hospital, a mortuary, doctors’ and dentists’ surgeries, fire-stations, shops, mess-halls, canteens, a church, a chapel and a synagogue.

The B17s – Flying Fortresses – flew daylight bombing raids at first over German-occupied Europe and, after D-Day and as the war progressed, over Germany itself. The planes quite literally had to be flying fortresses because no fighters had a long enough range to provide an escort, until very late on, when an inspired hybrid – an American Mustang fighter with the Spitfire’s Merlin engine – could accompany the bombers to Berlin and back. Just as in Joseph Heller’s ‘Catch 22’, the number of missions the ten-man B17 crews had to fly to complete their tour of overseas duty was increased, from 25 to 30, and eventually to 35. When the total number of missions from the base reached 200, a grand celebration included a visit by Glenn Miller and his band. Returning planes, sometimes badly damaged, would cross the coast near Great Yarmouth and then follow the ‘iron beam’, one of the railway lines to Norwich, which from Yarmouth to Needham runs precisely south-west and put the planes accurately on course for Elmswell. Although an especially long runway had been provided at the Bentwaters base, near Woodbridge, for bombers likely to have difficulty landing, a number of pilots could not have known that their wheel-brakes were out of action until they touched down at Elmswell, and on one occasion two agricultural workers in a field were hit by a plane that overshot the runway there. Two aircraft exploded on the base during bomb-loading, and in May 1944 an opportunistic enemy pilot bombed the airfield and destroyed one of the planes in its hangar. There were some mid-air collisions, too, but it was mostly in action that 160 aircraft and 400 men from the Elmswell-Great Ashfield base were lost. Some of the survivors from this very brave band of airmen are coming back, for a last visit, in June (2005).

Ex-USAF servicemen visiting in 2002 took many pictures of the relics still to be seen around the airfield site, such as this sergeants’ shower block. A CD-ROM was made entitled “Memories: The 385th Bomb Group at Great Ashfield” – a fine piece of historical work and a tribute to the men and women who served here. A copy was made available to Elmswell History Group for loan to its members, or you can visit their website. 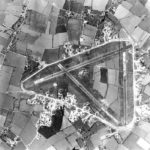 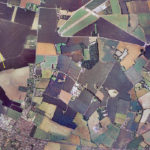 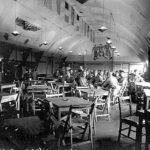 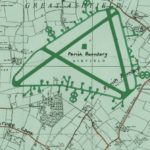 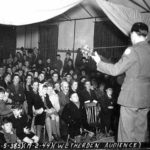 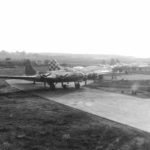 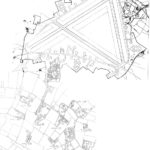 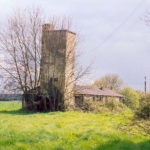 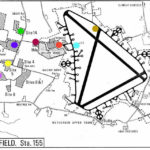 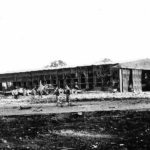