PEASE TRANSPORT LTD
(also known locally as TATE & LYLE’s)
1938 -1970 approx
During 1938 Sidney Phillips, trading as Eastbury Transport situated in Dagenham, Essex, a distributor of Tate and Lyle products, located and purchased the former cricket bat factory at Ashfield Road, Elmswell (opposite Grove Lane) for conversion into a depot to enable the extension of the distribution of Tate and Lyle products into East Anglia. He brought with him his family, consisting of his wife, four sons – Sid, George, Bill and Frank – and his daughter, Dorothy. He also bought the house named “Eastbury” in School Road. His four sons were involved in the business whilst Dorothy was at school.

The declaration of War in 1939 brought changes affecting the sales of sugar, which became zoned by Government economic and rationing strategy that had been introduced to save transport and to ensure that beet sugars were sold in those areas where farmed and processed into, then, only granulated sugar. Tate and Lyles’ imported raw cane sugar products were allowed into the zoned out areas only in very limited supplies in the form of speciality sugars and syrups, which at that time were unavailable from a then infant beet industry. These pressures, along with the need to complete certain work on the depot quickly, caused the takeover of Eastbury Transport by Pease Transport, the transport section of Tate and Lyle. A water tower was constructed on the site and various other works, including the loading and garage bays. Frank was not to return from the War but the three eldest sons continued to be employed by Pease Transport with Sid Phillips (father) appointed manager. The 90′ water tower was used as a navigational aid during the War by the USAF based at Great Ashfield; it was removed in 1957 (?), purchased for use by the Baker family, millers.

In 1947 Sid Phillips died suddenly at the age of 63 from a coronary thrombosis. He was in the process of building the two semi-detached houses in New Road, one for himself the other for his eldest son, Sid. Third son, Bill, was appointed manager of the depot and remained so until his retirement in 1970. The depot closed soon after this.

Not only did Sid Phillips bring his family with him to Suffolk but his mechanic, John Binden and his family. They lived in one of the cottages at the depot, the other being occupied by Bill. During this time George had left the depot and moved to run his own business in Ilford (not involved in transport). Dorothy became a nurse, married and lived in America.

The vehicles distributed beet sugar, working out of the local beet factories throughout East Anglia, including Cantley and King’s Lynne, as well as syrups and speciality sugars from the refineries ofTate and Lyles. Sugars and syrup being stored at the depot for distribution.

Locally the depot was referred to as “Tate and Lyles” though operated by Pease Transport.

This article was written in 1999; in 2001 the depot was demolished to make way for a small housing development.

Note attached to one of the photos.
Water tower, cottages and part of servicing bay, late 40s/early 50s 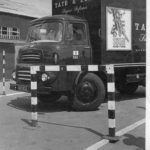 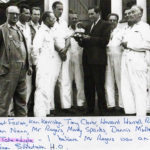 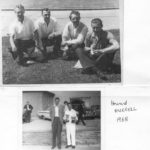 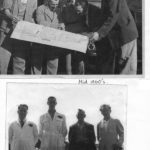 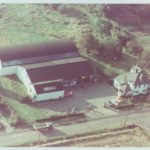 During WW2. The buildings opposite Grove Lane were Pease Transport at the time