John Collen was the proprietor of Warren Mill (picture) in 1874, according to White’s Directory. His daughter was married to Henry Baker and they also lived there – the house is just over the boundary in Wetherden, so their sons Robert Baker (1865), William and Philip were recorded as born in that village. On 22 December 1888 Robert married Sophie Roxborough, who was a teacher in a small school in Wetherden. At about that time they took over Home Mill here in Elmswell, moving into Ivy House just behind the mill. They had six children (picture): Christobel (1889), Dorothy (1891), Anne Sibel [‘Nancy’] (1893), Barbara [‘Ruby’] (1894), Henry [‘Harry’] (1900) and Kathleen (1901).

Henry is buried in Wetherden churchyard. After he died Robert had to demolish Warren Mill in order to sell the property (1904); the house is still there.

In addition to running Home Mill, Robert also used to have a coal yard, and he managed land for other people in Elmswell. He devised a horse-drawn potato planter. He also used to keep rare breeds of poultry; there was a demand for the eggs, and he had special boxes made – Hessian pockets in a wooden case – for sending these rare eggs all over the world by post [Tom Peck, who worked for Robert, branded these boxes; one of them can still be seen in Christchurch mansion, Ipswich]. As another sideline he weighed cattle: he made a tin enclosure with doors front and back, so the cattle from the pens by the railway could be run through his weighbridge and then up Ashfield Rd to Kemps meadow.

Robert died in 1942, and his wife followed two years later – both are buried in the village cemetery, as is also Christobel. Sophie had been bedridden for several years following a stroke which paralysed her right side. Have a look at her diaries of 1934, 1937 and 1938, which throw an interesting light on village life at the time. [Robert’s brother Philip is also buried near him.]

Harry Baker volunteered himself into the army (very young, like so many others at that time) and managed to survive WW1. When he came back he acquired an Austin tractor (picture) and went out ploughing for other farms – he could plough deeper than a horse-drawn plough. He married Florence Vere Downing in about 1926 in Norton. They moved into Willow House(formerly Garden House) on School Road and had two sons, John in 1929 and Jim in 1933. Over the road at Ivy House Christobel was looking after two foster-children, Jill (b.1927) and Josie (b.1931): these were the daughters of Harry’s sister Barbara. Robert called these children “his four Js” – Jill, John, Josie and Jim. [Barbara’s family had been living in S.Africa, but according to Sophie’s diary she died in November 1931, and later their father also died, so in 1936 the two girls were “posted” home to their grandparents.]

In the 1930s Harry became more involved with Home Mill, and also with Crown Mill, which the family had bought from the Hitchcocks; the production of feed mixes for livestock was a growing business.

Harry and Florence split up in about 1938, she staying on with the boys in Willow House. Harry re-married, his second wife Alice May being an Australian, and they lived in one of the Crown Cottages, which stood just in front of the mill (photo). When his mother died they moved back into Ivy House. In 1947 he renovated the house and enlarged it using shuttered concrete.

At some point Black Mill was purchased – no-one is able to put a date on this.

In 1959, just a week after his son Jim’s wedding, the couple went on a six-month holiday in Australia; on their return Harry had a serious heart attack, and decided that the running of the two mills should be the responsibility of its three other directors, while he took more of a back seat. He died in 1976, and his ashes were interred in Robert & Sophie’s grave. His wife stayed on in Ivy House, returning to Australia in the ’80s.

Jim Baker was born on 20th April 1933, and went to the village school until, in the summer of 1941, fire badly damaged Willow House where he was living with his mother and John, and they moved for a while to her mother’s home in Norton. Jim kept a lot of rabbits and chickens at Willow House and cycled over every day from Norton to feed them. In 1943 he joined John at boarding school in Bury, so had to get rid of all his livestock: a Mr Eke had a pony and trap, and Jim sold him the hutches and all, two trap loads – that money was his savings at school.

After national service (a cushy post in a London military hospital where the most exciting moment was admitting Major General McDonald), and training at Chadacre Agricultural College, he returned to Elmswell in 1954 and took up farming, purchasing his own farmland from the family company. At the Young Farmers annual ball in Bury he met Janet (separate panel), and they married in 1959 at Preston St Mary. Living first in Ivy House while Harry and Alice were abroad, they cleared the orchard and built new house, ‘Millstones’. They had three children: Jane (1960), Robert (1963) and Liz (1968).

Jim joined the board of R Baker & Son (as the firm was still known) in 1960, and took a lively interest in the animal feed business; he invented the Karibak system for efficiently delivering 1 ton of feed, which became an instant success. At the same time he continued to run and expand his farm, and manage the farm of another landowner. There were two other directors at that time, John Howlett who did the day-to-day management, and Brian Richards buying the grain and doing the marketing. On the death of Harry in 1976 Jim took over ownership. Feed production was by now concentrated in Crown Mill and the growing agro-chemical business in the Home Mill premises.

He had a couple of brushes with the authorities. When the A1088 was being built across his land, Jim had to sit in the road to force them to tunnel the drain across. And then there was the affair of the concrete blocks….

Robert Baker Jr. joined his father as partner in the farming business, and in 1991 the farming company J D & R J Baker was set up. The R Baker & Son milling and animal feed business was wound up in 1993. Robert lived at Ivy House in the ’80s after his step-grandmother left to live in Australia. When he married he purchased the house from R Baker & Son, and extended it at the back: he removed the concrete his grandfather had used and built an extension using more appropriate materials, incorporating some single-storey outbuildings. Jim and Janet have been in this very beautiful house since December 2004, when Robert and his wife Jessica moving to a converted barn in Drinkstone, where the farm office had been relocated in 2002 (in a converted cart-shed).

The workshop, large barn and grain bins were moved from the centre of the village to Crossways Farm, this becoming the centre of operations, and Home Mill was sold to developers and was pulled down in late 2004. Thus in the centre of Elmswell, where once the two mills dominated the scene and many local people were employed, now only Ivy House and Millstones remain Baker territory. However Robert continues (2008) to farm most of the land to the south-west of the parish.

Black Mill
Black Mill was to the west of Stationmasters House, beyond a concrete pad where sugar beet was loaded onto railway trucks, and was used to blend small lots of grain from different farms, 10 to 20 cwms each. [1cwm was 16 stone, or 2 cwt (‘hundredweight’)] Jim described the mixing operation of that mill: grain was brought in by lorry/horsecart, tipped out, hauled by elevator up to top, thence into a worm and spun out all over the floor by “bicycle wheels”. Little trap doors let it all pour down to the bottom floor; then it was augured again to the elevator, and weighed into 1 cwm sacks. These were really big sacks, but then Harry was a very strong man! Most of the mix was sent by rail to Stoke for the breweries. The grain brought to the Black Mill was usually from thrashing machines.

Census Information
1891 census: Robert and Sophia (both aged 26), Christabel (age 1), Dorothy (4 months), Caroline Watts as a visitor to Ivy House (Sophie was quite friendly with this Mrs Watts who had been the originator of Elmswell Baptist Chapel).

Janet Knox was born in Scotland on a small rented farm. In November 1950 the family (including five children) brought all their cattle in a special train to Lavenham station [the problem of milking on the train ride was solved by having calves travel with them] to start a dairy herd on their own farm, Preston Manor. It was horrible: they had to drive the cattle to the farm in freezing cold and pitch dark. The house had no electricity, just a black range which had to be lit each day. The milking had to been done in an outside mobile milking bale. It was a bitterly cold winter, frozen solid for six weeks.

House Fire
Willow House caught fire in June 1942, caused by electric cable rubbing against the wire netting covering its thatched roof; Jim, John, Henry and stepmother were all in the “swimming pool” (see Crown Mill article) one Sunday; Ray Leeks came over to tell them; Henry (who was fire chief at the time) hurtled off. Jim changed and wanted to go there too, but was not allowed along School Road because of the smoke, so he went round through Jewers’ and was pushed over the wall; father and others were carrying furniture out. Six or seven fire engines worked there till midnight, cutting all the wire and raking off all the burnt thatch. [When the house was restored, tiles were used.]

Millstones
This house was built in the grounds of Ivy House, starting in 1960 soon after Jim and Janet were married. It occupied some of the orchard where Robert had kept his rare poultry breeds. Two unusual features of its construction:

Work force at Crown Mill and Home Mill
1930s: one man at the front of the mill, who hoisted sacks from delivery carts/lorries up to the top floor, manhandled the sacks there, poured their contents down onto the lower floor and mixed it with other grains and ‘middlings’. Two workmen assisting in the mill itself, checking on machinery, bagging and a doing a host of other production jobs.

1950s: as above plus two directors in the office, one dealing with sales and the other attending the corn exchanges; Miss Nunn the secretary; two reps and three lorry drivers. Weekly milled output: 50 tons.

Defiant farmer ‘will go to jail’ before he moves concrete blocks 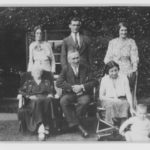 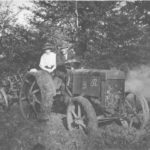 Harry Baker on his Austin tractor in the 1920s. 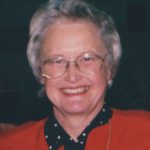 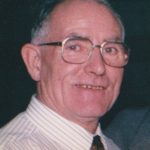 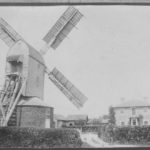 Warren Mill (the windmill was removed in 1904)