St. Edmundsbury Bacon Factory from the West
A GREAT INDUSTRY
Co-operative Bacon Factory at Elmswell
How pigs become bacon
The St. Edmundsbury Co-operative Bacon Factory at Elmswell, Suffolk, opened just twelve years ago, has been the means of considerably extending the pig breeding industry among East Anglian agriculturists, and at the same time has proved itself a sound financial undertaking. As the name implies, the factory is worked on co-operative lines, and the membership to-day totals 1,630. From its inception the profits have been such as to allow the payment of a dividend on the share capital each year, whilst the members also receive a bonus on the pigs they send to the factory. During the first working year, 1912, over eleven thousand pigs were slaughtered, and the last twelve months working show these figures to have increased to over 52,000, which in itself speaks for the success of the Society in encouraging and developing the pig industry in the Eastern Counties. It is interesting to learn that over thirty per cent. of the pigs slaughtered at Elmswell each year are drawn from the county of Norfolk, and farmers and pig breeders in this county also figure largely on the membership roll of the Society.

Standing upon some three acres of land in this picturesque Suffolk village the factory is constructed on the most up-to-date lines, and at the same time is worked in the

The model upon which the factory is based is that of those in Denmark, a country which stands in the forefront so far as bacon supplies are concerned. The promoters of the Elmswell factory realised that to grapple with the position that confronted them they must emulate their Danish rivals. Although the Danes have had to import British pigs in order to acquire the best strains, and had originally to import British workmen to teach them what they wished to know, they succeeded so much in their designs that they practically ousted us from our own market. Their success has undoubtedly been due to them having adopted the co-operative system, and the management of the factory under review therefore appeals to the British farming fraternity to support home industry by becoming members of the Elmswell Society, and to send their pigs to this Suffolk factory. The British public may also fairly be asked to support a home industry. Why buy foreign bacon when English of equally good quality, if not better, can be obtained ?

A VISIT TO THE FACTORY

Under the guidance of the secretary, our representative was recently conducted over the factory, where he was afforded the opportunity of seeing the various processes through which the pig pass for conversion into bacon. This revealed much to the writer that was both instructive and interesting. A start was made at the railway siding, adjoining Elmswell station. Quite half the pigs received arrive by rail, and it makes no difference to the farmers where they live as regards the cost of transit, for the consignees are willing to pay the freightage on pigs forwardcd. The pens are so constructed that they can easily be adjusted for the reception of pigs from a railway truck on the siding or a road waggon, as the case may be. From the reception pens the animals pass under cover to the resting pens, a large well-ventilated building approximately 40 feet by 36 feet, where they are graded. Here any member who so desires can obtain the live weight of his pig. All pigs are marked by an indelible process, and it is thus easy to trade any particular animal. From the resting pens the animals pass into the killing place, where they are slaughtered in the most

manner. A chain is attached to a hind leg and the pig is automatically hoisted to an overhead bar, from which it hangs head downwards. The expert killer with his keen bladed knife “sticks” the animal, which then slides along into the bleeding passage constructed of glazed bricks, where the blood runs through a pipe into a special well and is pumped into a vessel to be boiled. Afterwards it is pressed into a specially designed machine, and after drying is sold as pigs food.

After turning the corner at the end of the bleeding passage the carcase is automatically picked up and placed in a scalding tank, where it is kept till the hair is fairly loose. Then it is again lifted by automatic process into a scraping machine, where the hair is taken off. The hair is afterwards dried in the sun in a meadow and despatched from the factory in sacks for the East End of London. The best of it is used for brushmaking and the remainder for stuffing purposes. After the hair is removed the pig is lifted again on to the running bars. No lifting by hand takes place, and so well has the machinery been adapted that it takes very little energy to push a carcase from one end of the factory to the other. After the pig has been scraped it goes to the singeing furnace, which is heated by gas oil and steam and there it remains for 15 or 20 seconds to close the pores of the skin. From the singeing furnace the carcase glides along the bar to the

to be cooled down. It is then scraped again and subjected to another cold bath.

Continuing its journey along the iron rail, the carcase enters the gutting department, where the intestines and pluck are taken out, the former going to another department, where they are salted down by experts and cleaned for sausage skins. The pluck goes into the cold store, and is despatched to market. Continuing its progress through the factory, the animal proceeds to the weighing department, and there it is weighed on a machine which automatically records the weight on a card. As already stated, each pig is earmarked before being killed, and this mark is a1so put on the ticket recording weight and the member’s number. A record of the quality of the animals killed is also kept, and the owners apprised of its nature. Next the pig passes to the hanging room, where the backbone is taken out and the head cut off. The carcase meanwhile hangs in two equal parts in this room, which is the largest in the factory, and especially cooled by a continuous current of air. It next travels, still on the rails, which are intercommunicating, into the chill room, where the temperature is kept at approximately 45 degrees by means of a chilled ammonia refrigerating plant. Thermometers are stuck into the carcases, and when the desired temperature is acquired they are transferred into the large pickling cellar, where

THE BACON IS CURED.

By means of a force spray the brine is injected into the joints. Then they are stacked and covered with salt. Over a thousand sides were being treated in this way when the writer passed through this department. From here a turn is taken into the lard room, containing a large auto-boiler, in which all the fat is placed and boiled, and then transferred to a refiner, and eventually filled into bladders, 14 lb. tins, and 1 lb. packets. A cold store room adjoins this department. Next one comes to a room containing tanks for pickling pigs heads, backbones, feet, and other offal, and near by is a specially designed cleaner for pigs’ feet. This machine is so constructed that its revolutions cause the feet to be cleansed by rubbing against each other All the bones that are taken out of the joints &c. are placed in a large vat, and the fat extracted is despatched to soap manufacturers, whilst the bones are ground in an especially adapted mill and the bone dust sold for feeding purposes.

Even the toe-nails are taken from the feet of the animals and sold; in fact, in the words of an official, “nothing of a pig is wasted at Elmswell except its squeak.”

Passing on, a visit was next paid to the smoke stoves, which are capable of smoking 3,000 sides of bacon a week. In addition to smoked bacon, the Society also markets green bacon unsmoked. From the lime a pig arrives alive at the Elmswell factory till it is converted into pure English bacon is only a matter of three weeks. In the olden days bacon curing could only be done in the winter months, but with an artificial refrigerating plant it can be done equally well in summer at this factory.

In the small foods department the cooks were busily engaged manufacturing’ sausages, pork pies, potted meats, &c. This large room is fitted with all the latest appliances, and a huge oven is used for baking the pies, which are in keen demand not only in East Anglia but also in London, where a ready market is found for their sale.

The engine room is a most efficient apartment, containing up-to-date machinery. It has a 150 h.p. oil engine for charging the electric dynamo which provides the motive power for all the machinery in the factory, and also drives the refrigerating plant; whilst the large boilers installed supply steam for heating up the 10,000 gallons of water per day for use in the various departments. Across the railway siding

has been erected, and the factory to-day is capable of providing the necessary cooling for 2,000 pigs a week.

Adjacent to this building is the factory’s own artesian well, 180 feet deep, the water from which is pumped up by electricity. A tank near by is capable of holding 20,000 gallons of water in reserve. All the waste water from the factory runs into a septic tank, and eventually passes through filter beds into a dead well. It will thus be seen that from an hygenic point of view the factory is equipped in every detail, whilst within the buildings everything is scrupulously clean.

The offices are well apportioned apartments, where several clerks are busily engaged. In all, the factory employs about fifty hands, and nearby are several well-built cottages for members of the staff. Quite recently the Society has acquired in the village a farm, which has very substantial out-buildings, and these are being converted into pig pens for the purpose of carrying on feeding and breeding tests on the Danish lines. When things are in working order bulletins will be issued to the members supplying them with much useful information as to the best breeds and food.

The visit to this factory was indeed an education to the writer, and his grateful thanks are due to the courteous way in which he was received by the officials. 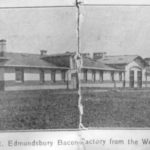 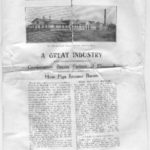 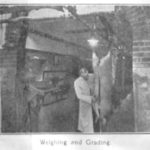 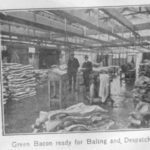 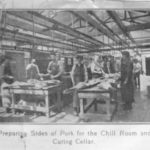 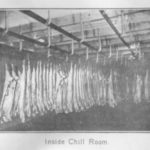