Meat Industry, February 1966
St Edmunds find growing success with their sausage sales
ST. EDMUNDS BACON FACTORY LTD., in spite of its name, produces as well as bacon, a very wide range of manufactured goods. In the year 1964 they made a net profit of £41,423 on their sales of sausages and small goods and although the ’65 figures could not he made public at the time of our visit, we understand that in fact they show a substantial increase.

This is a medium sized company – not as big as the Walls and Bowyers class—but a company with an enthusiastic management who capitalise on the fact that they are that much smaller.

Mr. K. C. Crook heads the full-time staff as General Manager, Mr. C. Jacques as Works Manager looks after the production end and Mr. J. Reed is the Sales Manager. Between these three there exists a spirit of liaison that would be difficult to accomplish in a bigger concern and an enthusiasm to try a new idea which can be implemented more speedily than in bigger firms.

St. Edmunds Bacon Factory Ltd., at Elmswell, Suffolk, is a farmers’ co- operative with 2,100 shareholders and a Committee of Management made up of farmers to which the full time staff is responsible. Besides those mentioned, Mr. G. W. Cousins is the Secretary and Mr. P. Merrick the Field Officer. Within bounds, the full-time administration staff are given a free hand and have incorporated some very revolutionary ideas into the system.

They have two main policies which govern their operation. One is that they deal only in quality products. Secondly they have a policy of “putting added value” into their products. By this they mean further processing—for instance with bacon, they now slice and vacuum-pack it.

By putting “added value” into their product by further processing, the original cost of the fresh meat becomes only one item among several and has less influence on the final price. With this system of ” added value ” they are able to keep fairly level prices for their products.

The story of St. Edmunds, however, dates back to 1910 when a group of farmers, all of them specialised in raising pigs, met to discuss the problem of selling their pigs. The outcome of this meeting was that they should start their own pig factory and sell their pigs to that factory.

In 1911 the foundation stone of the St. Edmunds Bacon Factory was laid at Elmswell. The farmers who formed the company could not launch the enterprise successfully without expert advice. They sent one of the members to Denmark to study the new Danish methods of production.

When the architects’ plan for the factory was being discussed they brought a Danish expert to Elmswell to advise them.

Rapidly the factory grew from its foundations until work was completed towards the end of 1911. In these early days about 230 pigs a week were processed through the factory. They came from farms by rail, on foot or by horse-drawn cart. It was not unusual to see the whole of the driveway to St. Edmunds factory thronged with a long line of carts waiting to unload their pigs.

The pigs were killed and sold as green bacon on the London Provision Exchange. A few sausages and pies were made and these were sold at the small St. Edmunds shop adjacent to the factory.

The new king, George V, was one of their first customers. Throughout the 1914-18 war St. Edmunds flourished. The rugged individualists who had co-operated in St. Edmunds had the satisfaction of seeing a new business growing to success in Suffolk.

St. Edmunds was then, and still is now, a somewhat unusual concern. It is the only independent farmer-owned co-operative pig factory in Great Britain. St. Edmunds is a joint enterprise between the pig farmer and the factory, with shareholdings limited in size and the dividend limited as well. It is a provident society, run by a committee with an elected chairman.

It was the end of price control in 1954 that brought about a pattern of activity which set St. Edmunds on the course it is today. Foreign bacon producers saw England as a rich market for their products and their heavily financed advertising campaigns made the situation difficult for the home curer.

St. Edmunds decided to diversify, modernise and improve their products. No longer would they sell all their produce on the London Provision Exchange; they would sell some of their goods direct to retailers and wholesalers. They employed a sales staff and put a van sales service into operation. The areas they covered were Norfolk, Suffolk and Cambridge but today this has expanded to the Midlands north of them and to London, Surrey and Kent to the south of them.

An all-out sales drive on London has recently been launched; it is the first phase of a two-year expansion plan to open the London market to St. Edmunds branded County Quality bacon and manufactured products.

Success came speedily. Within three weeks of the campaign’s start, for instance, St. Edmunds bacon had entirely replaced Danish in one large food hall, and sales of sausages reached 11,000 lb. a week in the first two months.

Spearhead of the campaign is the new depot at Ilford, from which a fleet of 2-ton vans delivers throughout the Greater London area. A new 7-ton trunker was specially brought into service to provide the depot with fresh goods from the factory for delivery against the previous day’s orders. The trunker was soon running at capacity and had to be supplemented by other vehicles.

The sales drive is being supported with specially designed merchandising material and in-store demonstrations.

At the factory, new machinery and improved production layouts have been introduced to increase throughput of manufactured goods, and plans provide for further developments as retail demand rises.

New round overhead rails, which give faster and smoother handling, were installed as part of the extensive modernisation – see here in the pork section.

“The success of our sales in the London area has been extremely encouraging, particularly against so much established competition,” says sales manager Mr. John Reed, who has been responsible for planning and implementing the expansion programme.

This campaign is typical of the success the company is finding with ever increasing sales and growing profits both with bacon and manufactured goods.

The root of this success lies in the quality of the pig they use. St. Edmunds have a very strict grading system as well as encouraging the pig farmer to rear a better pig . . . by this they mean a 6-8 score pig with minimum fat. They give a bonus to the farmer who produces a quality pig. Their unique position as a farmer- owned factory has enabled them to co-operate to a very close degree with the pig farmer to produce a better pig, and thus better pork and bacon for the consumer.

Mr. K. C. Crook was appointed General Manager in September 1963. A marketing and management expert, he joined St. Edmunds after experience in management, works study, engineering and even running his own business. He was instrumental in introducing Work Study into the factory to enable the company to take maximum advantage of the £100,000 modernisation scheme, the first phase of a planned long term expansion.

New machinery, new ideas and new techniques are constantly being added to the factory. One piece of machinery that was particularly interesting and which we understand St. Edmunds are pleased with is the Berkel and Parnall electric pork-chop slicer. This machine is manufactured in Holland and cuts besides pork chops, lamb chops, sausage, fish, etc., although we only saw it cutting pork chops. The results were very good indeed and the cut is made without any bone dust or splinters whatsoever.

An aspect of St. Edmunds which really sets it apart and which is indicative of their willingness to try new ideas, is their unique sales setup. All selling is done by a team of sales-telephonists operating one-way telephones to their customers from an office on the factory site . . . but most important of all is the philosophy behind this. The telephone-sales team pass the customer’s orders back to the factory who produce the goods ready for the customer. In other words the factory produces what the customers want instead of the customers being sold what the factory has to offer.

Each customer is ‘phoned at least once each day and the sales backed by a speedy delivery service and point-of-sale material. Forward estimating for the factory supplies is done from the sales office on detailed records of each customer’s purchases and this system, the brain-child of Sales Manager, John Reed, is working very successfully. St. Edmunds can look back on fifty years of trading and they have survived and prospered because in the past they have seen the challenge and have been ready to meet it with ideas such as this.
Conveyorised cutting table, installed as part of the modernisation programme.

Pork pies and steak-and-kidney pies have been popular in E. Anglia for years, and are now becoming available to a wider population in London and the Midlands. 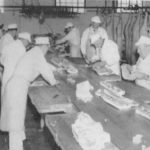 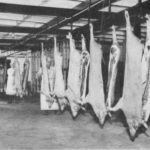 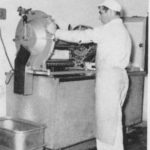 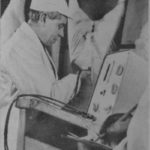 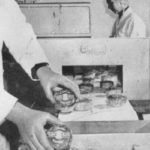