From East Anglian Daily Times, 25th March 1985
Quality foodmark gives ‘degree of assurance’ to customers
Consumer influence forces up production standards
By Peter Hopper, our Agricultural Editor
A DECADE of progress by the St Edmunds Bacon Factory at Elmswell mirrors exactly the influence of the consumer on the United Kingdom food production industry in forcing up standards. The factory, which has been operating on behalf of Suffolk farmers since 1909, has in recent years formed the food products division of the Eastern Counties Farmers cooperative.

This week it adds the British Quality Foodmark to the packs of bacon already marketed under the British Charter Quality Bacon seal of approval. Its own logo “Farm Kitchen Foods” is seen on vans which deliver about a third of the total output to shops in East Anglia and further afield.

The other two-thirds of production goes to multiple supermarket businesses which market the produce under their own labels. Processing of bacon rashers into vacuum packs, together with other bacon products, has doubled since 1974 and now uses just over 3,000 pigs a week from local farms. It has meant rebuilding and enlarging the plant to conform to Common Market-approved standards. Managing director Mr. David Neal says that major changes in direction have been influenced (a) by the Accession into Europe, which cut off UK Government sport; (b) a major Middle East war which escalated fuel prices; and (c) a determined challenge by supermarkets to gain a bigger share of the retail market from traditional outlets.

The factory had to find a way to manage without Government subsidies, cope with increased costs of distribution and accept the challenge laid down at the retail end. The number of small .distribution vans was reduced from 30 to fewer than 10, daily delivery was abandoned and emphasis was placed on. promoting less perishable lines, at the same •time rejecting once and for all the “picnic box” image in providing, lunchtime foods. Attention was switched to what is termed the top end of the food market, with top-grade pigs in and quality bacon going out. Changes in processing were progressive, starting with the acceptance of pigs at 70kg instead of 80kg by gradually tightening grading requirements. “We wanted to encourage the supply of raw materials with a high lean content,” said Mr. Neal. “Everything is on view in supermarkets and displays of vacuum packs have forced quality standards upwards.” It is with some pride that Elmswell can boast a high volume of sales to Marks and Spencer -and other well- known supermarket chains. The big policy switch was not without casualties, the workforce being reduced from more tha 600 to its present Size of about 450 today. Since then, the number of workers has not been increased despite doubling of production, indicating better utilisation of labour.

The introduction of British Charter Quality Bacon two or three years ago was welcomed at Elmswell, especially as at least two of the major multiples supported the scheme. Mr. Neal says that if the new Foodmark now gives the same degree of assurance of quality to the consumer it could only help the industry. “As a nation we are looking for a greater degree of self-sufficiency but I find it difficult to reconcile cries from the Government for self-sufficiency with access by law of excessive imports from other EEC countries,” he said. “It may not be possible to reconcile the aspirations of the UK Government and at the same time not offend the ideals of the Community as a free-trade area.”

Imports still dominate the home bacon market, even though quality has helped our farmers who push up their share from 39 to 44 per cent over the past five years. In total pigmeat, the UK has a self-sufficiency of only 69.9 per cent, white the Dutch have 250 percent and the Danes — our biggest competitor on the home front — have an astonishing 400 per cent self- sufficiency. Pigmeat imports of all kinds now total 550,000 — more than imported by Germany, France or Italy.

At Mr. Neal’s invitation I showed a 21b pack of bacon with the Foodmark on the label to Mr. John Graves, head of a family butcher business in Ipswich. The reaction of a man who has sold British meat for nearfy 40 years was typically patriotic. Britain, he said, had the best farmers, the best land and produced the best pigs. He approved of the new pack, naturally. However, son Michael spotted that the label was covering the eye of the meat and thought it should be moved. “Presentation goes a very long way in this business,” he said. I telephoned this feedback to Elmswell and it was noted.
Breeding for leaner bacon
THE effect of consumer preference for leaner bacon has gone back through the food chain to the farmer, who has geared himself to producing the type of pig that will give us meaty rashers. But changes that must start with the genetic “improvement” of a living species do not happen overnight. In fact, many years of painstaking breeding work is involved. While medical bodies may have sound reasons for deciding that consumption of animal fat is bad for health — it has been linked with heart disease — the farmer has to be sure that it is not merely a whim of the time. Fashions in food change like everything else.

Mr. David Black, whose family farming company at Bacton is the largest supplier of pigs to the Elmswell factory, urges some caution in the pursuit of leanness. He says pig producers have been striving for many years to get leaner bacon pigs, but in doing so they have to be careful not to affect the succulence or eating quality of the bacon. Pressure from the supermarkets for processors to supply lean bacon to their own tight specifications is rigidly applied and that involves the farmer constantly reviewing techniques in breeding and feeding.
Breakfast
Consistent quality is what is needed and Mr. Black believes British pig farmers can continue to deliver the right product for today’s market. Other changes for the industry in recent years have also been brought about by consumer preference. With more wives going out to work, the so-called Great British Breakfast of bacon and eggs has been in decline. Few people now have time to linger over the first meal of the day. However, bacon is still being eaten at other times of the day and in many catering establishments, “breakfast” remains on the menu for most of the day.

The pig production side of the farming business of David Black and Son Ltd — the name refers to the present Mr. David Black’s grandfather — is vast by any standards. Around 3,000 sows and gilts are comfortably located on four separate sites, with just over 1,000 reared progeny going to the Elmswell factory each week, a total annual production not far short of 60,000 pigs. The family has been associated with the factory since 1927, the pig side of the business having been developed by Mr. Tom Black. 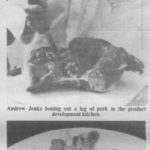 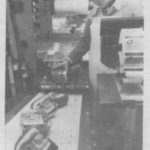 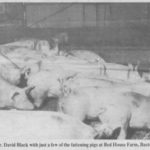 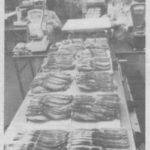