Interviewed by Norman Kenyon in August 2010
at their home, Olive Cottage in Oak Lane

Charles and Doreen were both born in Elmswell and have lived here almost all their lives. They knew each other at school, were married in 1951, and for many years played a leading role in the local Baptist Church. They have four daughters: Ann, Barbara, Jean, and Christine.

Charles’ parents came to Elmswell from Colchester when his father Bill, keen to work for the railways after being de-mobbed from the army, applied for a job as porter at Elmswell station. Initially they lived in Woopit, but moved to Chapel Row, School Road, where Charles was born on 14th January 1929. Like many others he attended the local school until he was 14, and his family went to the Methodist Chapel over the road. He remembers how few cars there were then, maybe only half a dozen, so it was quite safe to bowl hoops along School Road, with no traffic problem at all until the factory hooter went – then there would be hordes of bikes going home to Woolpit and Norton. Another pastime which would be impossible these days: the lads could go round to the bacon factory and help unload pigs etc – they were even allowed to watch pigs being slaughtered.

There were opportunities for making himself useful: he did errands for Mrs Scase, wife of “Darky Scase”, who lived in ‘Pightle Cottage‘, fetching chicken feed (corn or maize) from the mill. When he was 12-13 he went to Bunkers Hill (Mr. Woolnough) to work on Saturdays: for 4d. (at first) he cleaned out the stables, chicken houses, and goat house (one had to be so careful here!); and if it was thrashing time he would help stamping the chaff, a messy job – not so bad for wheat, but barley chaff really got your socks in a mess…
For a year or so, when he was 16 years old and too young to join the Fire Brigade as a fireman, Charles served it as a “messenger boy”, manning the telephone and passing on messages.

Charles left school at 14, and worked as a warehouseman at ICI Stowmarket. However when he married Doreen there was no house to be found in Elmswell, so he took on agricultural work at Knettishall on the Norfolk border, where there was a tied cottage available, and they spent four years there. Returning to Elmswell he had one year working on Green Farm (for Doreen’s father), and then the rest of his working life in Stowmarket, first at the Garden Factory, then when the boss retired he was delivering frozen foods from the ‘successor’ company, Pullman Foods, until his retirement 15/16 yrs ago.

Doreen’s paternal grandfather Alfred Pearson, previously a coachman in Blundeston, had moved to Elmswell in about 1918 with his wife Elizabeth and son Harry (Henry), then about 16/17 years old, born in Ely. He rented Eastwood Farm, a large arable farm on the border with Great Ashfield, and Harry worked with him there, and also on three “WarAg” fields belonging to Green Farm (such fields were temporarily taken over from the owner during the war because they were not being farmed productively). Harry also farmed two little fields by Oak Lane.

Doreen’s other grandfather Isaac Sparrow, one of 12 children of David Sparrow (pictured outside the old Hovells pub in Gt Ashfield), was a sawyer at the bat factory, and his eldest daughter Mabel was born there (in the northern semi of the existing dwelling, now called Sawmills). After he died his wife Lavinia lived in No.2 Tudor Cottages.

The family attended the Baptist Chapel. In the gallery at the bottom the photo labelled “East wood 1” is of the family at East Wood – Alfred (left), Mabel, Harry, Elizabeth, Elizabeth’s mum (on the binder). In the photo labelled “East wood 2” it shows Mabel (right) with her mother and siblings, in the garden of Sawmills; in the background we see Yew Tree House, which is on the other side of Ashfield Road, at the end of Grove Lane; here Miss Harriet Durrant the schoolteacher lived, with her father Robert who was a sadler – his workshop was the black barn now converted into a dwelling.
Alfred (1954) and Elizabeth (1966), Henry (1978) and Mabel (1977) are all buried in the cemetery.

Henry (Harry) Pearson married Mabel Sparrow in 1925. Wanting to live apart from his parents, Harry had the year before built a tiny single-bedroom wooden hut in the grounds of Eastwood Farm. Doreen was born at the farm on the 21st February 1930. By the time she was 7 they decided they needed a bigger place, so they moved in with Alfred & Elizabeth again while Harry knocked the hut down and built a bungalow, shown in the photo below. Her brother Leonard was born on 8th May 1945 (VE Day, so his middle name was Victor!). Doreen too went to the local school (so knew Charles slightly), but she also lent a hand on the farm, as all good farm children should. She got to drive a tractor at the tender age of 10 – she was allowed 10 days a year off school on a signed card. She reckons it was a happy childhood on the farm: she could wander where she pleased, except not into the wood, which belonged to someone else.

In 1939 part of Eastwood Farm was taken for the airfield, and from the adjacent farm in great Ashfield an 11-acre field along the northside of the wood was also taken. So they were very close to where the bombers were serviced. The children used to count the aircraft out on a mission, and anxiously back in. Some of the US servicemen attended the Chapel, and after the war the Pearsons received food parcels from them by way of appreciation.

From 14 years old until her marriage at 21 Doreen worked full-time on the farm, driving the Fordson tractor – sometimes with her very small brother sitting on the mudguard! Her father crank-started it for her in the mornings.
In about 1947 the family left Eastwood farmhouse and moved to the end of Oak Lane – they achieved this by dismantling the bungalow and rebuilding it on its new spot, with a brick kitchen added behind. Harry tacked expanded metal on the wooden walls and rendered them, and Doreen cut all the asbestos tiles for the roof with a hacksaw! Alfred and Elizabeth also moved to Oak Lane, building their bungalow ‘Glendinin’ alongside that of Harry & Mabel’s ‘Crimond’. The photo here is a receipt from Florence Borley for the purchase of the meadow (apple orchard) they built on. When Charles and Doreen came back from Knettishall in 1955 they moved into this with Elizabeth to look after her (Alfred had died in 1954) until they bought Olive Cottage just along the road in 1960.

With four daughters to bring up, Doreen did not go back to work for many years, but eventually at 37 she started working three evenings a week at the bacon factory, making sausages. However she served the community as a willing volunteer:

Charles was a Methodist until they became engaged, when he went along to the Baptist Chapel. Even at his first visit he realised there were a lot of people there, but none wanted to share the work, and consequently father-in-law-to-be Harry Pearson was overloaded with the roles of Treasurer, Secretary and Sunday School Supervisor – this struck him as rather selfish, to say the least. In due course he volunteered his own skills, serving as Secretary for about 40 years until 10 years ago. With Doreen at the organ the Rudlands were central to the life of the Chapel for those many years. The picture is of an outing to Wembley Stadium to hear Billy Graham (click here for names). When the chapel’s centenary came around in 1987, Charles co-authored a pamphlet relating its history.

Referring to the pamphlet, and in particular to the “fortnight’s mission in a cottage”, we reckoned it was a thatched cottage called Homefield (now demolished); Charles produced a photo showing the original mission tent in about 1884 – Ms Watts and her sister somewhere in the middle, and Homefield in the background? In front of this cottage the “small iron church” was bolted, perhaps where the barn is on the later Ashfield Road photo. He also has a photo of a 1932 mission on a meadow in New Road; Doreen is a babe in arms far right. We agreed the 1887 tin tabernacle couldn’t have been intended to hold 300 people – Kelly’s directory was mistaken – even for 100 there is standing room only! The vestry added in 1922 was half a WWI army hut!

Eastwood Farm (modern picture) was partly clay lump – the right-hand front part of the building (the picture here is taken from the rear) was still thatched at this time. The smaller barn at the centre of the picture has gone, but the big barn where Harry had his workshop (he was always inventing tools and the like) is still standing. To the far left is a haystack (one of several) and leaning against it a makeshift shed which she often used as her personal “retreat” – she’d spend hours in there because it faced the sun, and had a swing inside. Doreen also remembers the old brick oven in the kitchen. Water was drawn from a well over 100 feet deep (a lot of work!), and in summer they kept the butter cool down there… But when a new well was dug for the airfield the water-table was lowered so their own well dried up.

One can also see the farmhouse just at the left side of the bungalow picture above. It used to be much more surrounded by trees, and had very clay soil; it was once a gamekeepers cottage (I had worked out that Nathan Warren was there in 1841 looking after all of East Wood – see the red circle in the centre of the map). 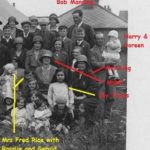 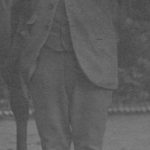 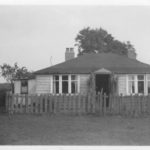 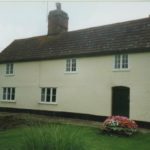 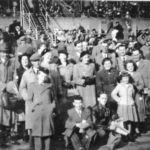 Trip from Baptist Church to Wembley to hear Billy Graham 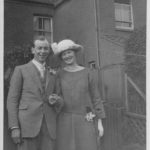 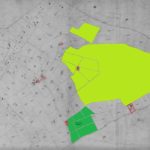 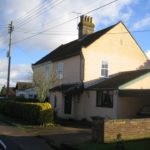 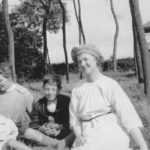 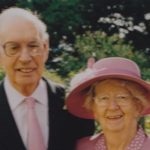