Eric was born in Thurston on 24th August 1931, the youngest child of Andrew and Laura Peachey of Stoney Lane Thurston; he was brother to Dorothy, Laurence, Lily and Trevor.

Educated at Thurston school he left to join the navy training ship the Arethusa as he was totally fascinated by the sea and ships; he then moved on to the HMS Ganges at Shotley. After leaving Ganges he joined HMS Superb, but was shattered when he was invalided out of the Navy on medical grounds in 1950. 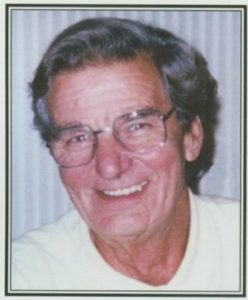 In 1951 Eric joined the John Rannoch company where he met his future wife Una. They were married in 1957 and moved into The Cottage in Wetherden Road, Elmswell – later moving next door to Threeways, Cross Street. They had three children: Thomas (who sadly died in 1960), Christine and Timothy, and then grandchildren Carly, Laura and Joshua whom he dearly loved, being the great family man he was.

In his leisure time Eric was a true Ipswich fan, having supported them for 60 years, and would never have a bad word said against them – he even helped to set up a supporters club branch for Elmswell and District and he was chairman of this for many years.

In his earlier years he played cricket for Wetherden Cricket Club, but after his playing days he joined Elmswell Cricket Club, working tirelessly on the committee, and helping organise many race-night fundraising events. Eric was also passionate about his golf and was a member of Stowmarket Golf Club where he played for many years.

Eric died in Elmswell on 21st January 2005, aged 73. He was well liked and respected in the community and will be sadly missed.

Tribute by Doug Reed in the Elmswell Newsletter of February 2005, under the heading of Elmswell Cricket Club

It is with great sadness that we have to report the passing, on January 20, of one of the Club’s Committee members and lifelong supporters – Eric Peachey. Known to us all as ‘Uncle Eric’ he was in fact, unrelated to most members of the Club (as far as we know!!). However, as he was David ‘Wink’ Peachey’s uncle we all took the liberty of referring to him in that way. He didn’t seem to object – so we rather assumed that he took it as a compliment and a sign of the affection that we all felt for him.

Oddly enough, Eric wasn’t a cricketer. He did play occasionally in the early days – but just nine matches for Elmswell, achieving a top score of 13 not out. Mind you, many of our lot would be happy enough with that. If he wasn’t a cricketer (and, let’s face it, you don’t need to be to play for us) he was not only a keen sportsman in other respects – golf especially – but also an energetic supporter. Uncle Eric’s strength was his commitment and enthusiasm. With Paul Peachey also playing for the Club, maybe his desire was to see one of his nephews succeed in the world of village cricket? Pigs and skies, eh?!

His willingness to support the Club was never better shown than when he acted as MC on fund-raising ‘race nights’. These go back years and were first held by the Club in the old days of the Memorial Hall when technology was not as advanced as now. No projector screens, for example – so Eric could be relied upon to bring a sheet (did Una know?) on which the races would be displayed. Last year, when all the sports clubs got together for another such event, who led the evening? Yep, none other than our own, our very own equivalent of Leonard Sachs?! If you didn’t know Eric before the evening started, you’d soon take to his endearing style and the twinkle in his eye as he directed proceedings. Race nights will forever be synonymous with Eric.

He became a Club Committee member in 1977, and made a Vice President in 1991. In those formative days after the Club had re-emerged, his wife Una would help as well, doing teas (no doubt, looking for that usurped white sheet on which to place the food!). He took his roles seriously, being a champion of both ‘common sense’ and of the need to ensure the Club incurred no unnecessary expenses – so that things like member subscriptions were set at a realistically appropriate level. At those Committee meetings themselves you never quite knew what he was thinking. Mind you, it was partly because he couldn’t always hear but we were sure he used that to good effect and you’d always keep a wary eye on him. He’d invariably interject when you least expected. He would also help with heavier work if required. Just a couple of years ago he was till putting some younger folk to shame by turning up for the ‘end of season’ work on the pitch. Word is the following day, undaunted by his efforts, he played and won a local golf tournament. What more can you say?

Only once did anyone see him mildly ‘agitated’, i.e. other than his usual mild- mannered, dark Kent type self, and that was over a beer and some discussion about the relative merits of ITFC over pre-Delia Norwich FC.

One puzzle remains. On ‘race nights’, Eric would turn up punctually (unlike his attendance at Committee meetings!) carrying a small briefcase which, curiously, never seemed to get opened. What was in this secure portable lock- up – sandwiches, Una’s irreplaceable valuables, the “Uncle Eric Guide to Assorted Race Nights”, prized photos of his nephews in action (actually, you can cross that one off), his collection of jokes for all occasions, an Ipswich Town FC season ticket? The mystery, like the man, will stay with us. One thing is certain. When the day comes, and you’re in heaven wondering how to pass the time – if you hear those immortal words, “The Tote is now open” – you’ll know who it is. We’ll miss you Eric.