The Early Days
Jill Jacob was born Jill Redit on VE Day, 8th May 1945, in School Road, in the old house opposite Pightle Close; she was the fifth of six siblings: Sheila, John, Sid, Tony, Jill, and Janet. Her father was Ernest Frank Redit, born in Ashfield, who worked in the dairy up at the Hall (and did all sorts of other farm jobs too); Jill remembers taking a can up there to bring milk home. The Hall belonged to Mr John Kirkwood, later Mr Tom Chaplin, and their home (now known as Old Farm Cottage) was part of the estate. Her father also farmed the whole garden, where they’ve now built Farm Meadow, and supplied Mr Leeks with lettuces etc to sell in his shop (at the PO). He retired at 65.

Jill’s mother Dorothy, now 85, is from the old Elmswell family of Goymer – the father of Alan Goymer (one of our village postmen) was Dorothy’s cousin. Her son John (64) still lives with her in Thedwastre Close. She has 6 children, 12 grand- and 18 great-grandchildren.

Dad was also in the Fire service: at night he was summoned by the bell at the side of the bed; the Fire Station was near the railway crossing, behind the Albatross Garage (on the PO side of the road). He was part-time, paid quarterly – they relied on this to pay the electric bill. Like many in the village after the war, they had electricity but not water. They had paraffin and coal for heating, and an outside toilet; there was a well and pump outside the back door. “Father kept pigs and chickens, rabbits and geese; we also used to have pheasants from the fields. The old black range (black lead polish) always had something hot for us to eat. The copper used for heating bathwater was also used to cook potato peels etc to feed the pigs… He did everything to keep us in good food.”

The six children were spread over eight years of age. They had their weekly bath on Saturday afternoon in a tin bath in front of the fire, girls first, one after the other, then the boys. There were two big rooms downstairs and 3 bedrooms (3 boys in one, 3 girls in another), with “big old army overcoats on the beds to keep us warm, and army blankets.” They went to the old primary school in School Road, from well before 5 years old until the 11-plus, and then to Beyton. Although they were entitled to school dinners, Father insisted that they go home to dinner (a matter of pride…). All six of them did paper rounds. Mr Leeks had a paraffin round – Jill’s brother John used to deliver round Wetherden Upper Town, on a trade bike. They had no fancy clothes, but good food and a happy family life – “a full house of us, it used to be wonderful really”. They played darts in the evening, the dartboard being hung on the stairs door; and rummy and whist… They had a ‘best room’ which they only went into once a week on Sundays. There was no TV until she was about 13 years old, and then they all had to contribute money earned from paper rounds to pay for it.

They took sandwiches to the fields and watched Dad doing the harvest, the brothers chasing rabbits out with sticks, and helping with the haystacks. They used to have great fun in Kitty’s Wood, along Ashfield Road; they had a bicycle track there; it was wood as far as Bacon Factory drive. They also used to play in Pye’s Wood, up the Bacon Factory drive, or up Hawk End Lane and over the stile and railway.

The furthest they went out of Elmswell was a Sunday School outing to Felixstowe once a year, and family outings to Felixstowe (on Whit Monday) and the Abbey Gardens.

Of school days, Jill remembers watching films in the old school hall; and skating on the pond where the Fire Station now is – she remembers Colin Finch (her cousin) almost drowned falling through the ice. And her first bike her dad got from Bury market for £2, and put it on the train to Elmswell – she was bursting with excitement waiting for the train to arrive.

Chapel
The whole family went to the (Methodist) Chapel, three times every Sunday. In the morning service they had two hymns, then the preacher gave the children a little talk, and before his adult sermon they went out and had an extra little Sunday School in the back room; proper Sunday School was in the afternoons – they liked that because they did all sorts of things; then Evensong at 6:30. The family took up two rows; her brother John was so embarassed when Mr Rudland (Charles Rudland’s father) had to introduce all 8 of them in turn to the preachers (who were usually visitors). Chapel used to be full of people in those days – these days there may be only 20 or so.

Mr Charles Nunn was one of the Sunday School teachers, very strict – “we were all frightened of him!” Jill was in the Girls Guildry, and the boys in the Boys Brigade, both of these being under the auspices of the Chapel; Mrs Rose Bloomfield used to take Guildry – she lived in Chapel Row (opposite the church), but later moved to Rattlesden. And she remembers having Scripture exams in the hall. Church fêtes were held down Rose Lane.

Jill is still involved in Chapel life, and has a group meet at her home once a month.

Herbert and William Redit (in the 1925 choir photo) are Jill’s dad’s uncles. Joe and William Bloomfield were not related? They have gone, but Wm’s son, also William, lives in 13 Pightle Close.
You could get 3-pennorth of chips from Crew(?) Stiff, Station Road where the hairdresser used to be on the left (bungalow now, Pound Cottage)
They took their shoes to old Beany Baker the cobbler, right down Ashfield Road, before you get to Grove lane, the white cottage on the right. He moved back to where Margarets Hairdresser is now.
There was a shop in School Road, opposite the Fire Station – a tin hut, selling groceries, and you could get “farthing chews”
Kay’s the barber shop up Wetherden Road, just past Prescott Drive; it was later owned by Mr Leeks, who also owned the Post Office
Mr Leeks rented another shop: the tin-roofed lock-up which used to stand almost in front of ‘Kence’ in School Road; it was owned by a Mrs Kerridge, whose daughter still lives at this house.
They used to get orange juice from Mrs McNeill, who had a little shop behind the Albatross Garage; she lived in Hawk End Lane, ‘Old Manor House’.
Kitty Lord lived with sister(?) Lucy in the cottage actually in the woods, the only house just past Mace (now ‘Pippins’).
Duncan’s uncle Charlie Jacob had the Mace shop; he used to make crisps.
Mr & Mrs Fred Kidd (grandparents of Mark Partridge, of the Baptist Church) used to live next to Jill’s mum & dad.
Pightle Close was being built in 1965 when she got married. The houses cost £2750-3200, even then; similarly Warren Lane at about the same time. There was no Bennett Avenue….
You could walk around the village in the old days – you knew everybody, and it was safe to walk alone.
Gymkhanas and fêtes were held in various places: on Pye’s Meadow, which was at the rear of the Old Bankhouse and Victoria Terrace; at General MacDonald’s home (The Grange); in another meadow behind the New Road houses, which included the pond to the rear of the library on Cook’s Road.

Later on
Jill left Beyton school just before 15, and went to work in the office at John Rannochs in New Road, who dealt in eggs and poultry.{The office was in the big white house where Andersons was later, then New Road Engineering, and it was demolished in early July 2005}. Then she moved over to Haughley Park, where she worked for the next 10 years, until her first daughter was born.

At school there had been a lovely lad called Duncan Jacob; he lived in No.1 Victoria Terrace at first. His dad George had a garage (now The Beeches), owned by his grandad Bill Jacob before (and Cattons later). They did bike repairs as well.

Jill and Duncan married in 1966. They lived for a year with his parents in Drinkstone, then moved next door to her parents in School Road, at £2/month rent. This was the smaller right-hand half of the pair of houses, with two bedrooms, kitchen and dining room. They had to take their furniture through her parents’ house, up the stairs and through a door into their side of the building. Although they by now had piped water, they used to go over to Aunty Violet’s once a week for a bath (Jack Goymer’s wife), instead of heating the copper up at her mother’s.

In April 1970 they moved to Thedwastre Close, and Charlotte was born in July; Hannah arrived in 1973. In 1981 Jill started a part-time postal round for Mr Green at the PO, and later added Tues & Thurs behind counter at busy times. Then almost full-time (not Fridays) from when Stanley King had to go into hospital.

Her children went to the same school in School Road, Hannah riding with her on her postal round and being dropped off at 9 am; but the transfer to Beyton was now at age 9 years.

Tribute in the Newsletter, May 2006
25 YEARS OF FIRST CLASS SERVICE
A very familiar face disappeared from the Post Office a week earlier than expected having been precluded from standing because of a broken toe. Jill Jacob surprised many people who did not know that she was due to retire at the end of March.

Born and bred in Elmswell, Jill started her Post Office career with a part-time post round to which two days of counter- work were soon added. After four years she became a full-time counter-clerk in the former little Post Office section within Mr Green’s grocery shop (before the Co-op was developed in its place). She completed her 25 years in the Post Office as we know it now.

Jill’s previous office employment had stood her in good stead and she greatly enjoyed meeting so many people and the varied work that was entailed. She did not enjoy the frightening experience some years ago when, standing alone in the office, a masked and armed robber shattered the glass screen and demanded that she should give him the money.

Although she already feels sad that she is not seeing so many of the familiar faces, Jill is looking forward to summer days in the garden and to joining more fully in village activities from which there are so many to choose.

From Our Features Editor 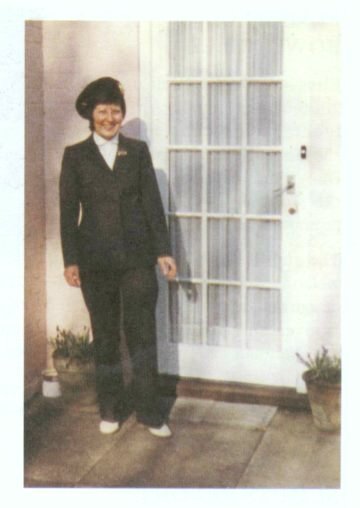