Interviewed on 17th May 2005 at Chilton Meadows Nursing Home.

May Fox was born Mary Welham on 3rd November 1920. Her father was Thomas Welham, who was sent to Elmswell (from Lavenham) to work in the Bacon Factory during WWI because he was turned down for the army, having a weak heart. As a sideline he swept chimneys when he first came here – he wasn’t really a sweep, though he’d help out locally when needed; he was a bacon factory man and a carrier to/from Bury. He was at the factory quite a long time. But he was struck by lightning when May was 8 years old – a ball of fire came through the factory roof; he was knocked to the floor and partially blinded; thereafter he had to have the oil lamps at home shaded. He did odd jobs for Rannochs at ‘Hoods Farm’ – the White House (now demolished) which was then half offices and half residential.

Her mother was born Augusta Everett, in a very pretty cottage down the dip at Bunker’s Hill, no longer there [somebody in London bought it and let it go to rack and ruin].

May’s mother went to the same private school as Ella Kinsey, at so much per week. Later, while working at the bacon factory, she met and married Thomas. Both Thomas and Augusta are buried in our cemetery. May had also had a brother several years older, but during WWI a Zeppelin came over, so mother took him out into the cold for fear of bombs, but sadly he caught pneumonia and died.

Grandfather Everett was a carrier: for example, he’d pick up a dress from Bury with his horse and cart; if it didn’t fit he’d take it back. But he died quite young and she never knew him; she knew her grandmother, who lived into her 80s. They were both buried in Tostock (where they were born, and had sung in the church choir).

May was born in the house to the right of Tudor Cottages in School Road. It was then a pair of cottages – theirs was the left-hand one. It was just tiny, a room and a little kitchen and outside toilet, and 2 bedrooms, lit by paraffin lamps and candles; and a water pump outside. They used coal and wood for fuel. They didn’t have a back garden so couldn’t keep chickens and pigs as many others did; but they always had a dog, and a horse for the carting business. Next door was Mrs Hawes who owned a galvanised-roof shop at the front, a general store, and made the most beautiful ice cream. On the other side of her were two thatched cottages (Mrs Scase and Mrs Fuller); these were eventually pulled down to make the entrance to Pightle Close.

In about 1928 they moved to a council house in Wetherden Road, with a large garden, so they could now keep chickens. They had a piano there – Father and Mother sang but didn’t play piano; Father played accordion.

She remembers skating on the pond to the north of School Road, in front of Redits’ house – it was dangerous. And she remembers Ella Kinsey then living in the house just past Hawes car park, between the house his mother lived in and the printing works.

When she was 5 years old she went to the old school in School Road; she missed a lot because of asthma, but it was a lovely school. Jill Jacob’s mother Dorothy was also there, and Duncan’s brother. The Headmaster was Mr Henry Stern: “You were OK with Mr Stern if you could do maths!”. He lived in Cooks Road in the north half of a pair (now a single dwelling where David Hawes lives); David Hawes’ parents lived in the other half, next to the police station. Miss Durrant was another teacher – she lived opposite Grove Lane with her sister.

The family went to Elmswell Church three times on a Sunday; her mother was quite strict. May sang in the choir (until she became too arthritic to kneel), and she was both christened and married there. There was a lovely big choir – the mens’ choir paraded around the church twice a day in black cassocks.

Leaving school at 14, she worked at Rannochs in accounts till the day in 1948 when her son was born – she literally did the men’s wages then dashed off to hospital! Rannochs started with a Mr Williams going round with a basket (before she started work) collecting eggs from local farmers, and he built up an eggs-and-poultry firm. His brother had a wine business in Finsbury Pk Rd. Apparently the two named their businesses after two mountains in Scotland: Kinloch was the wine and Rannoch the poultry.

May played tennis (pat-ball, she says!) on a court next to where the school was {the surface is still there}.

Desmond and May Fox

Desmond was born 17 Dec 1921 in Chelsea. His home suffered a direct-hit from a doodlebug in WWII: his mother was killed (his father was away), his brother was thrown up the road but escaped with scratches, and Des was buried for four hours, protected by a fridge. He came to live with his aunt in New Road, in the right-hand cottage of a pair (next to Rannochs White House) where he’d stayed in school holidays.

May didn’t see much of Des during the war: he went to the Royal Corps of Signals (Catterick), then Landguard Fort, Orkney Is., Plymouth, Burma, and Assam, but luckily was never a prisoner. She was a nursing auxiliary – only 3 weeks training – in Billericay. Des came home in mid 1947, and May was still living with her parents in Wetherden Road. They were soon married, in Elmswell Church, and bought a house in Prescott Drive; their son Garrick was born a year later, and Jeremy 8 years after that.

Des also worked at Rannochs, working his way up from lorry boy, and finishing as a production manager and welfare officer. He used to organise the outings at Rannoch’s: they would go to Yarmouth perhaps in several coaches, or up to London. He played football for Elmswell, and got concussion when heads clashed in a Stowmarket match for the cup. In 1967 he had a bad heart attack while they were on holiday – that’s when May started working part-time at the general store nearby on the corner of Prescott Drive and Wetherden Road (owned by Mr Leeks and previously occupied by Mr Kay the barber).

Des was very keen on amateur dramatics, run by Mrs Hitchcock (mother of Betty living in Norwood now): it was a first class troupe, and people came from all over. They rehearsed in the old church hall, and then in the Memorial Hall, until Mrs Hitchcock was too old; Des took part long after his heart attacks; he had a good singing voice, and took the lead in Me and My Girl. He sang in the choir and was a sidesman.

They lived in Prescott Drive till 1989, when Des’ health problems and the large garden dictated a move to 20 Rowan Green. May transferred here to the Chilton Meadows home on 29 July 2004.

Memories of shops and businesses in the village

(An aside: her mother told her that an earlier vicar [MacFarlane?] fell out with somebody and had the Old Rectory painted black!)

I mentioned some names of families I know have been here a long time, to see what she might recall, and also showed her a few group photos that are ‘in the files’. There is a bit of a risk that some things said about people are wrongly remembered, or I misunderstood what May meant: if so please get in touch and put me straight!

(May is not on it, as she was often poorly and missed a lot of school)
Ruby Bruce lived where Jack Stavers (?) lives now, lots of children
Which was Ruby? Violet was Mrs Goymer, red-haired, lived in Church Road,
Vera Clark’s father was a butcher, where the fish shop is now; she married Mr Hammond and lives in Rowan Green
Grace Scutcher, Edith Baker came from almost Ashfield, Marjorie Manning was Mrs Dalton’s sister, Olive Goymer
Cecil Cross, mother lived in a house behind Goodfellows (Walnut Tree Cott?), Ernie Rosier lived in Warren Lane
Charlie Lambourn was one of Mrs Redit’s brother-in-laws
Mrs Goodchild teacher – not quite-top row on the right end
George Jacob, maybe 3rd from end
Mabel, Doris A, Lily Manning, all died, Gladys Bowles used to teach the piano
Nora Henderson, Sybil Scase, Dorothy lived in the pulled-down cott in School Road
Dick Manning was Mrs Handyside’s brother. 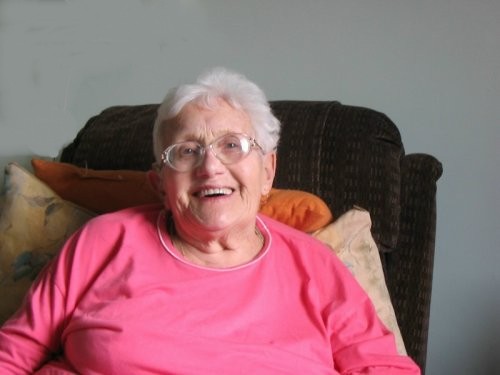