I visited Peter in 2010 at his home, just along the road from the Kennett premises of Thurlow Nunn Standen. I am grateful to him for most of the pictorial and other material in these pages. See also his article in the May 1993 Elmswell Newsletter.

Born on 22nd January 1928 in Blackbourn House, Peter’s earliest memories are of The Laurels, adjacent to the F J Nunn works. The youngest of the family, he was so keen to take part in the family company that on Fridays after school he rushed back to sweep the carpenters’ shop, where in those days they still made tumbrils and other horse-drawn wagons. Like his brothers before him, he went on from the village school to Culford; he went as a day boy for 3 years, then a boarder for another 6; John Baker (son of the milling family of Bakers) was a near-contemporary and school friend. Peter then deferred military service (1946) and signed up to do a metallurgy degree at Kings College Newcastle, part of Durham University. Before he left, he designed and made a metal sign carrying the trading title of “Frank J. Nunn & Sons” and positioned it on the main showroom building. This was the first time in the firm’s 37-year history that the name of Nunn had been posted on the building. Entries in an old wage book indicate that Peter was then enjoying a weekly wage of 30 shillings.

During the school holidays and university vacations he helped the firm out in whatever capacity was currently needed – for example, as a driver during the busy time of August. After 2 years university Edward told him there would surely be a place for him in the firm, despite there being already two brothers heavily involved. He was delighted to know this, but asked his father to let him finish his degree first, and he duly graduated as BSc (Dunelm) in June 1949. Of course he also still had to do his military service, which he served (appropriately enough) in REME.

He was finally free to join F J Nunn & Sons permanently in 1952. He was put in charge of the Kennett branch location which was just being started up.

It was at this time until 1955 Peter ran a youth club in Elmswell, meeting in the old church hall (next to the school) – rather a cramped hall with a very narrow stage and when they played badminton they crashed into the walls; it had coke-fire heating and no toilet.

Peter married Anne in 1955; they lived for 3 years in Bury St Edmunds until a building plot near the firm became available and in 1958 they moved into a fine new house – they are still there. He retired in 1988, but as his son is now a director the company name of Thurlow Nunn Standen is still valid.

Walter Hawes (senior): Peter often went over on printing-related errands, and was somewhat afeared of David’s grandfather.
School teacher Miss Mulley (who was of the family having the bus company in Ixworth).
Robert Baker – a very nice man; used to push a bicycle around the village, smothered in miller’s dust (the bicycle, that is).
The owner of the Albatross Garage, Commander Bird, fancied himself as a aircraft mechanic and built his own. He built the (very small) plane in the right-hand (southern) workshop of the garage (where later John Baker kept his domestic appliance stuff); he flew it from little airfield in Bury “opposite the barracks”, across the A45 Bury St Edmunds-Newmarket and crashed, and that was that.
Bill Jacob, both senior and junior, lived in No.1 Victoria Terrace, and the driveway alongside led to the yard where they had 2 or 3 lorries. Next door was the cycle shop [and then the Jewers Sack Store].
Mr Chamen, a friendly gent, city type, liked people who are “tidy round the neck and clean shoes”. He took part in a ‘brains-trust’ for Peter’s youth club.
Mr Gosling, a London barrister, had a small farmstead down Blacksmiths Lane, over Wetherden way. He too was on the brains trust, as was John Kirkwood.
Dennis Dyball: they went together by train to school in Culford, and they also played hockey together – a club based in Norton (Clive Jewers’ father Edward also played there, as did the elder Nunn brothers, briefly). Dennis became a good family friend – he came to play tennis at The Laurels and many other family functions. 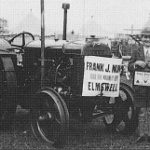 A young Peter Nunn with a Fordson tractor on Frank J. Nunn’s stand at the 1938 Suffolk Show in Bury St Edmunds 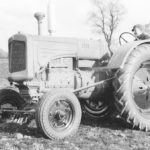 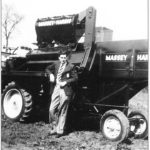 Peter Nunn with a Massey-Harris 726 combine 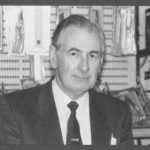