Parish church, medieval. Restored 1862/64 by E.G. Hakewill and 1872 by J D. Wyatt. Nave, chancel, north.and south aisles, west tower, south porch, north vestry and organ chamber. Flint and septaria rubble with freestone dressings (C19 work has knapped flint and rubble). Slated nave roof, plaintiled chancel rooff. Flat aisle roofs behind parapets. Parapet gables. Mid and late C14 work in chancel: hoodmoulded south doorway, reticulated traceried east window and two south windows, ogee-headed piscina. Mid C14 south nave arcade of 5 bays, with fluted octagonal shafts and moulded capitals. Reset and restored late C14 aisle windows. Fine late C15 tower, with twin belfry windows on each face under a single hoodmould. Good flushwork tracery to parapets, and on buttress faces: at the head-of each buttress is a canopied image niche. A frieze around the base has more panels with intricate tracery. West doorway with grotesque hoodmould corbels. Good C15 nave clerestory: 5 bays of traceried windows, between each is a pillar once supporting a figure, and beneath is a frieze moulded and with fleurons of a wide variety of designs. Tall C15 shafted tower arch. In 1872 the north aisle was added: the north doorway and several windows, all of late C13, were re-set in its walls: Y- traceried windows, and the doorway which has a heavy hoodmould with grotesque corbels. The C15 porch has 3 image niches over the entrance, whose jambs and shafts remain. Otherwise the porch was restored in 1862. Mid C14 inner south doorway. Interior fittings: The northern arm of a C15 parclose screen in the south aisle: 4 traceried panels with cresting above, the solid panels below have C20 painted figures. C15 octagonal limestone font: the sunk faces of the bowl have shields each bearing a letter, beneath it are angels, and birds support the stem. 5 good C15 poppyhead benches with traceried ends and buttresses in the north aisle, and 5 more in the south. A fine monument in the south aisle to Sir Robert Gardener (d.l6l9): a coloured reclining figure with his kneeling son beside him and an empty gown lying below. A coffered canopy on Corinthian columns and his Coat of Arms forming a crown. A C15 slab in the south aisle floor with large brass sinking: a figure within a large cross. The C19 work was as follows: Virtual rebuilding of south aisle by E.C. Hakewill in 1862, and remodelling of chancel in 1864. Addition of north aisle and rebuilding of main roof by J.D. Wyatt in 1872.

At present this is just a collection point for related photos and articles.

The Church is known for its remarkable tomb of Sir Robert Gardiner, a lifelike effigy appearing fully at ease…

More explanation of Sir Robert Gardener’s tomb in St John’s Church, Elmswell
Provided by Chloë Cockerill who is the former Regional Development Manager for The Churches Conservation Trust, with special interest in heraldry and fabulous beasts.

I have checked up on the arms of Sir Robert Gardener which are:-
Gules (red) a chevron between three tigers’ heads erased or (gold)
Crest – a rhinoceros passant argent (silver)
(Burke’s Armory 1884)

There are many different branches of the Gardener family with different arms and different crests, and so he could well have chosen a rhino to be different from all of them because arms relate to one individual, not a family.

It is always difficult knowing why someone chooses a particular animal or other charge for their arms unless there is a pun on their name (e.g. Shakespeare has a spear) or some obvious connection with their history or profession. I have checked Gardener’s life and can’t see any obvious connection with rhinos and their country of origin: perhaps he just liked the animal and its history and the mystery surrounding the properties of its horn. There is also the point that there were numbers of people applying for grants of arms in the late Tudor period, and as so many knights and others already had chosen lions, these new applicants often turned to the Bestiaries to find more exotic animals, e.g. the griffin.
One other explanation could lie in the symbolism of heraldry which is not agreed by all the experts, some say “load of rubbish”! However in “Symbolisms of Heraldry” 1898 by W. Cecil Wade, his entry states “The rhino is of immense size and strength and of great ferocity when roused. It never seeks combat, but in defence of itself or its fellows, will fight at all odds. It may be regarded as denoting this character in heraldry, but it is a very rare bearing. It is borne as a crest by the Colvilles, and by the Wades of Essex, and also as a supporter in the arms of Lord Mountcashell”

Hope this helps, let me know if another explanation comes to light.

White’s 1874 directory had this to say…
THE CHURCH (St. John), consisting of nave, aisles, chancel, and a fine tower containing five bells, stands on a commanding eminence. It was thoroughly restored, and a new north aisle waa built in 1872, at an expense of about £1500, raised by subscriptions and by local efforts. The south aisle was rebuilt in 1862, at a cost of about £500, defrayed by rate and subscription. The chancel was beautified in 1864, solely at the expense of the Rev. W. H. C. Luke, the present rector. The tower was repaired by Mrs. Blakely, in memory of her first husband, Captain Long. The east window, which is of stained glass, was inserted by Mrs. Connell, an aunt of the rector’s, to the memory of several deceased members of her family. In the church is a good organ, presented by the rector in 1864, and in the south aisle a carved oak screen in a tolerable state of preservation. There is a matrix of a fine floriated brass cross to a former rector in the south chantry. It contains an elegant mural monument in memory of Sir Robert Gardiner, Kt., who was Chief Justice of Ireland 18 years, and died in 1619, aged 80. The figure of Sir Robert, nearly as large as life, and well executed, is in a recumbent posture, and his son is represented as kneeling at his feet.

The church of St. John the Divine, erected by the monks of Bury and situated on an eminence, is an edifice of local flint with stone dressings,in the Decorated and Perpendicular styles, consisting of chancel, vestry, nave, aisles, porch and an embattled western tower containing 5 bells, two of which, however, are cracked: the base and angles of the tower , which was restored in 1913, and the porch exhibit fine flint work in various devices: in the church is a monument to Sir Robert Gardiner, a benefactor to the parish: the chancel was almost entirely rebuilt in 1864: the north aisle was built in 1867, and a short time previous to this the nave was repaired and fitted with an open timber roof and oak benches: the octagonal font is of the Decorated period: the pulpit and carved litany desk, both of oak, were presented by W.Luke esq.: the wrought iron, screen, with gates separating the chancel from the nave, was erected in 1864 by the then rector as a memorial to his parents, to whom there is also a mural brass: the nave was restored in 1911; the walls were decorated in colour in 1884 and several memorial windows have been erected: the church affords about 300 sittings. In the churchyard are the remains of an ancient cross. The register dates from the year 1553.

Present at this service, there were apparently 69 people, 12 dogs, 6 rabbits, some hamsters and guinea pigs, as well as a few children’s ‘favourite’ toys.
As many names as known are given with the photos. 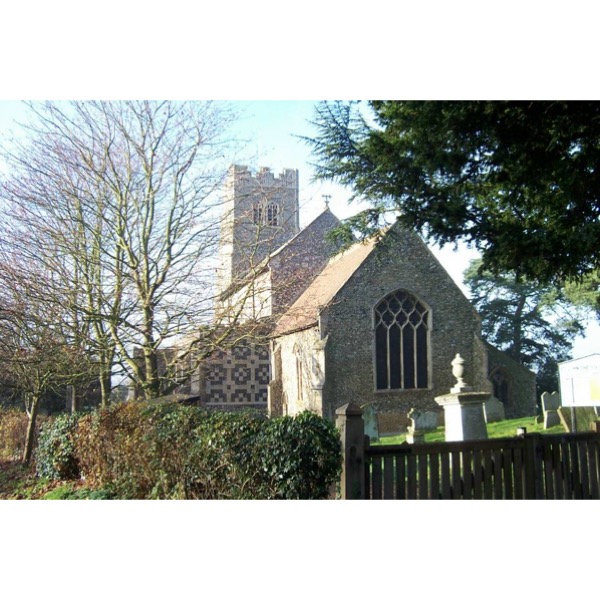 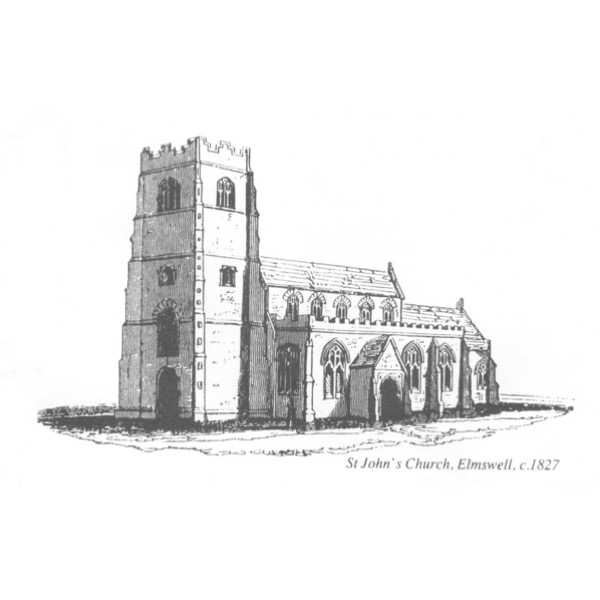 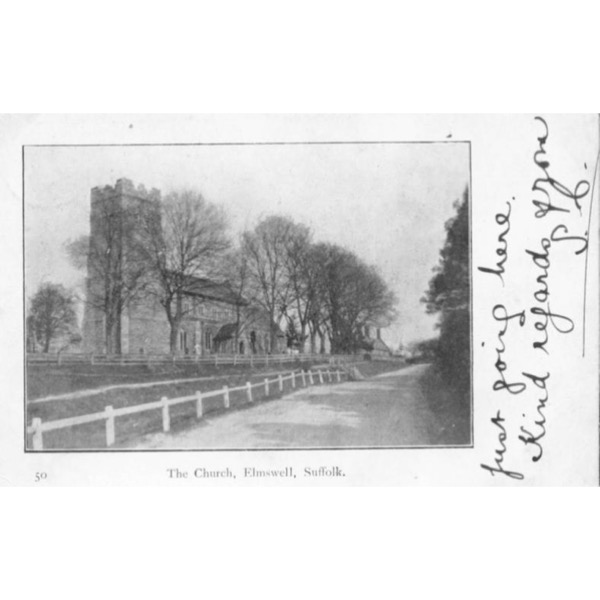 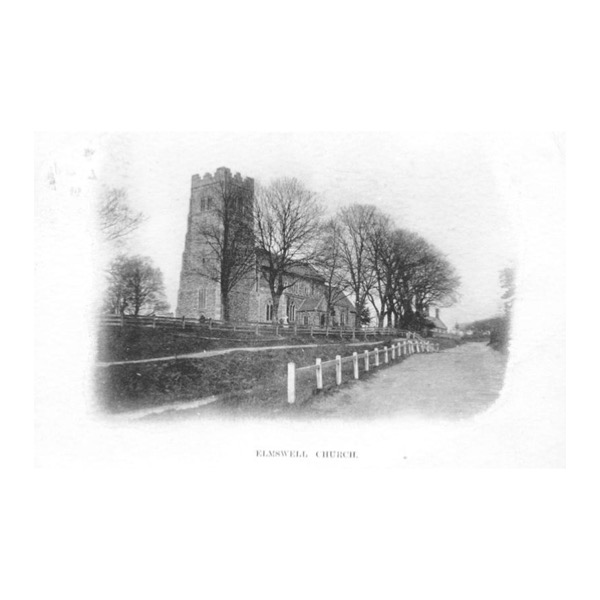 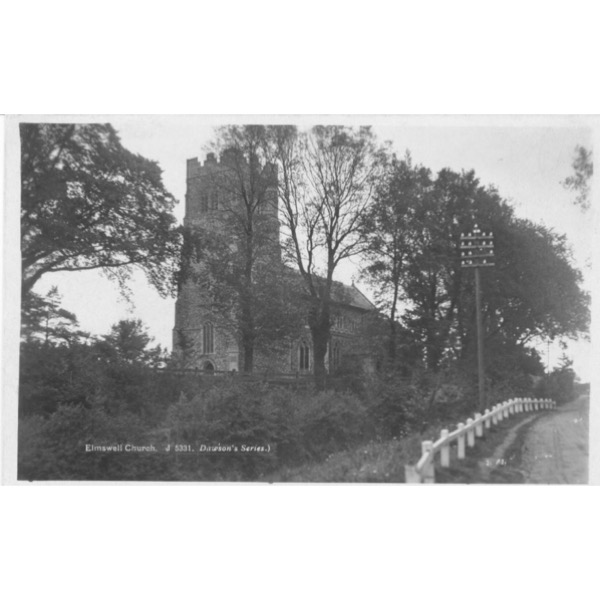 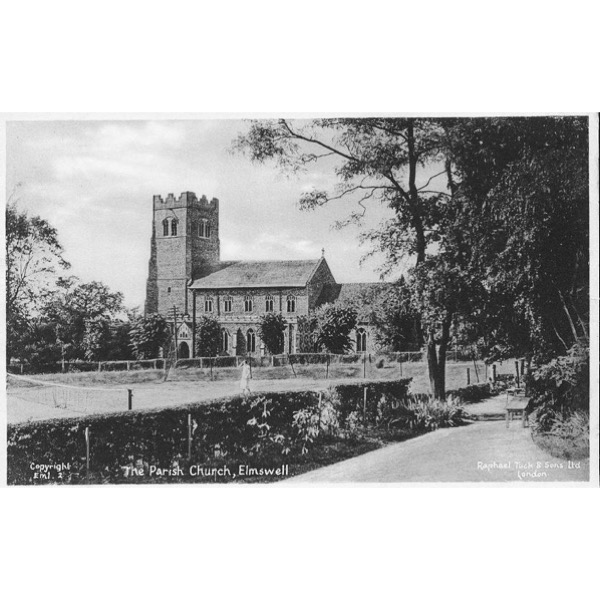 8. St John's Church Church, from across where old rectory was 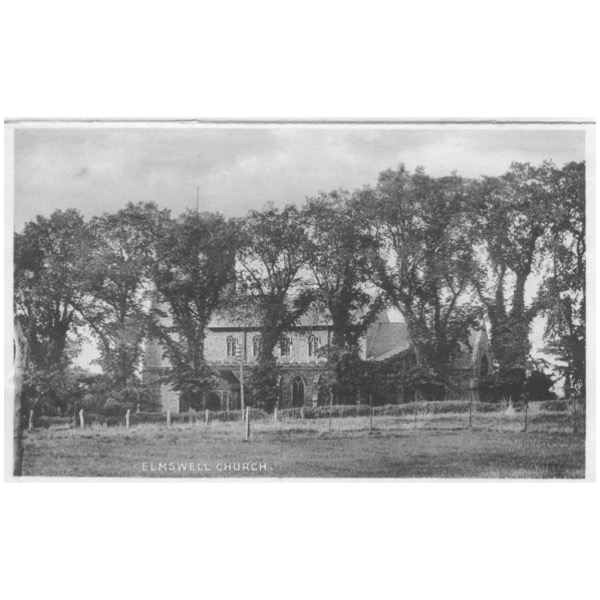 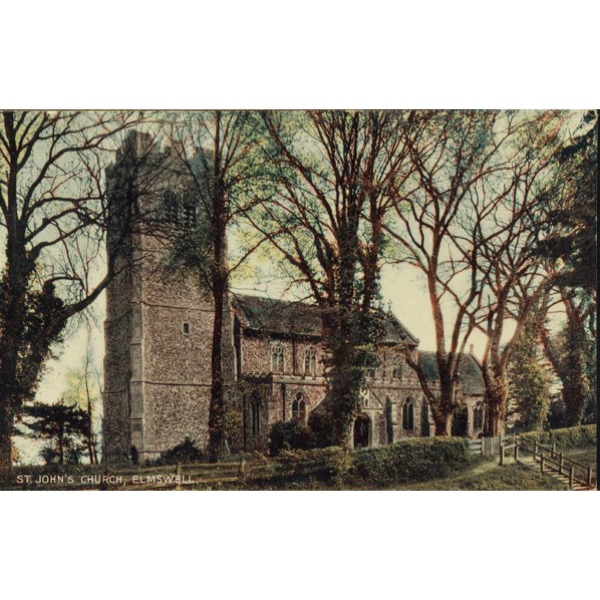 19. Church across field (2000) Graham Portlock, taken at foot of hill with church in the b/g, crop of rape in full bloom. 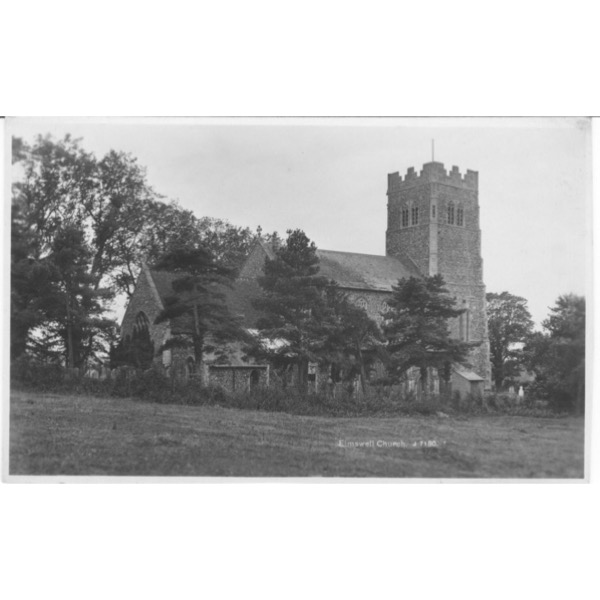 22. Church From the north