Reprinted from “FARMER AND STOCKBREEDER” 30 June 1964
BULK STORAGE WITHOUT CAPITAL
Returnable Bins Supplied Free of Charge
MEAL can be purchased and stored in bulk without the associated problem of providing capital for a bulk storage installation, by customers of R. Baker & Son (Elmswell) Ltd., mil- lers and merchants at Elmswell, Bury St. Edmunds, Suffolk. The business is now being run by Mr. Jim Baker who supplies the meal to the farm in one ton “Karibak” bins. When they are empty the bins are replaced with a fresh de- livery of full ones. Customers are thus able to avail them- selves of bulk prices and the advantages of bulk handling while purchasing rela- tively small quantities of a number of different types of feed.

The bin system and the service Mr. Baker provides is as yet in its infancy but already he has a number of satisfied customers. Among these is Mr. H. E. P. Mann of Park House, Tostock, Bury St Edmunds. Mr. Mann at present purchases about 6 tons of feed a week in the one ton bins for his 7,000 battery hens. He bene- fits to the tune of 12s 6d a ton for bulk purchasing and an incalculable but attrac- tive amount as a result of reduced labour costs. Before the bins were introduced deli- veries were received in ½cwt sacks, 240 of them. Men had to be taken from other jobs on the farm to give a hand with the unloading and much time was lost. Now the millers’ lorry drivel can unload the bins himself using a special crane fitted to the lorry. The bins themselves act as vermin- proof, weather-proof stores and have only to be stood on a simple and cheap stand outside the stock houses. A feed barrow, which is used to top up the hoppers in the battery house, is filled by operating shutters in the hopper shaped bottom of the bins. Paper meal sacks are completely eliminated. Mr. Mann had considered installing the more conventional bulk storage bins but rejected the idea in favour of his present system. He hopes to bring his 35-sow pig rearing and fattening unit into the scheme very shortly. He anticipated that any other bulk system would have involved him in heavy capital expenditure on bins —he buys at least four pig mixes and each would have needed a separate bin. With the ” Karibak” bin system he has only to provide a four-bin-stand costing less than £20. The bins are provided by Mr. Baker.
Capital Cost
From the millers’ point of view, too, the bins appear to have many advantages. Mr. Baker was anxious to start a bulk delivery service but the storage bins at the mill, the auger or pneumatic systems for hand- ling the meal, the weighbridge and the bulk delivery lorries would have cost him well over £10,000—an investment a rela- tively small-scale country compounder could not justify. So about 15 months ago he set about solving the problem and his brain-child is the Karibak bin system. His 10-ton lorry will hold eight one-ton bins, all loaded at the mill by a fork life truck and un- loaded on the farm with the Atlas crane on the lorry.

The bins were designed by Mr. Baker and the crane was modified to his specifi- cations. The bins, made of sheet steel, are 6ft 6in high and 3ft 5in square. For the system to be economic, they must have a turn round time of about two weeks. Delivery time is reduced too. Handling paper sacks one man is hard pushed to deliver 60 tons a week. In bins he can deliver 100 tons.

Mr. Baker estimates that the bins have a 10-year life but should pay for them- selves in three years. The scheme has been in operation since January, but be- cause he was manufacturing the bins himself the supply was limited and the Karibak service was also limited. The bins are now being made under contract and Mr. Baker intends to market them to other millers and compounders at £46 each for orders of from one to 50 and at £43 10s each for orders of over 400. He is also marketing the cranes at £940 each.

Mr. Baker is not only an inventor and a compounder, he is also a farmer. Poul- try in batteries on his farm get through 4 tons of meal a week. Paper sacks cost any miller about £1 per ton of meal, so by using the bins for his own needs he can reckon to save himself £200 a year. Another factor, of course, is that meal in paper sacks is sold as gross weight and 40 ½cwt paper sacks weigh about a stone, so a purchaser receives 28lb more meal for each ton which he purchases in the bins.

The bins are loaded at the mill using a fork-lift truck.

At the farm the Atlas crane which has been built on to the lorry swings the bins round to the angle iron stand.

A shutter in the base of the Kanbak bins is opened to fill the feed barrow. 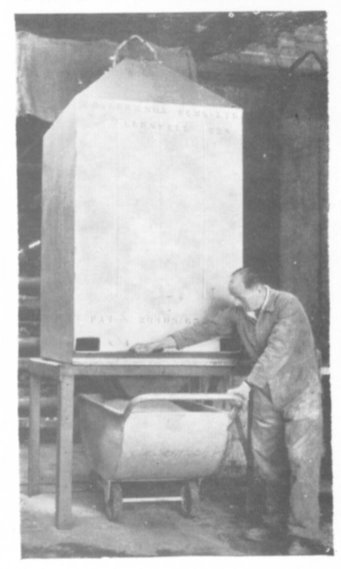 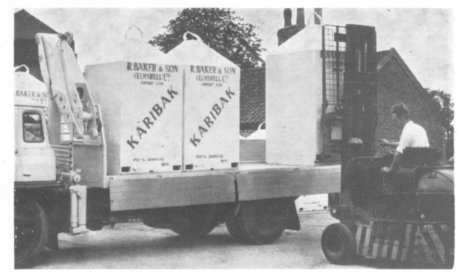 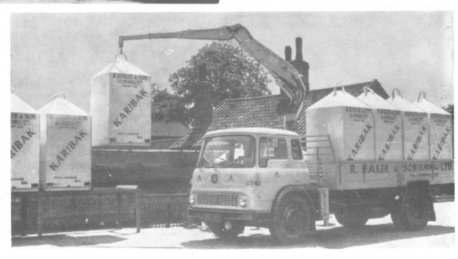