Elmswell and its neighbourhood now presented a picture of “Narrow lanes and paths winding from one farmstead to another, farms often named after medieval occupiers, numerous greens and remains of ancient woodlands, Forest uplands largely colonised between 12th. and 14th Centuries”.

The original one (see page 5) may have been built on a sacred pagan mound (Church Hill). King Edwin was converted and baptised in 627. The church could have been erected at the time he gave the ‘manor’ to the Abbey.

Monks from Bury Abbey built the stone church on the same site in the early 14th Century.

Peter Clericus was priest in 1283.

A field next to the cemetery is named Ringle Hedge. Ringle could be a corruption of Rishangles.

Flint and stone dressing, Churchyard closed in 1900. The base of the Cross is 14th C. It was restored in 1904. Notice the inscription on the base. 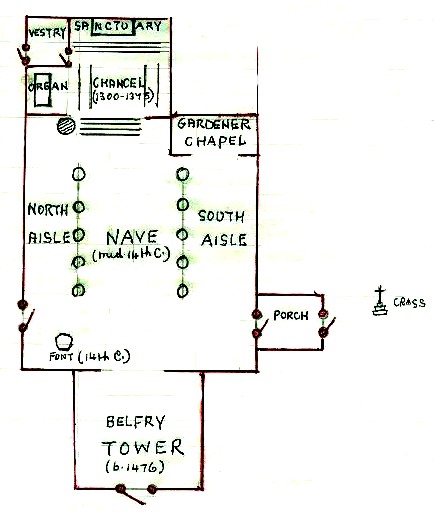