East Enders and the ‘furriners’


Elmswell is like London. It has a west end and an east end – and each has its own character and outlook. In the west end live the newcomers – the residents of Pightle Close – and in the east end you can find the established villagers. And the claim of some quite eminent residents is that the two don’t mix enough. Parish council chairman at Elmswell – with a 1,300 population, largest in Thedwastre and seat of the rural council – is farmer Mr. Dennis Dyball. “There is too much we and they in Elmswell between the older villagers and the newer ones,” he said. “We have difficulty gettlng the old and the new to blend together . This is always a difficulty in larger growing villages. I don’t know whose fault it is – a bit of both I suppose.”

Mr Dyball has a farm of 370 acres and is one of Elmswell’s members on the rural council. Fellow member and Labour councillor Mr Barry Young agrees with him about Elmswell’s split personality. Mr Young has been living at Pightle Close for six years and is one of the newer residents. “There is too little natural integration taking place in the village,” he said.
A need
One of Elmswell’s biggest needs is a good playing field, said Mr Young. The village has two successful footbaIl teams but no decent pitch. “There has never been a rural council policy towards playing field amenities like you get in urban areas,” he said. But the Rural Community Council is now working towards a playing fleld on the site of the proposed new middle school. Generally though, Elmswell is fairly well served. It has five general stores, two women’s and one men’s hairdressers, a cobbler, draper, butcher. two pubs and a fish and chip shop. It has a judo club and a dramatic society and is one of the most industrialised villages in the county.

A man who knows Elmswell as well as anyone – both its good and bad points – is former Thedwastre public health inspector Mr. Oswald Wyatt. Mr. Wyatt retired from the council three years ago and has lived 40 years in the village in his house called “Buttenhaugh”. “In days gone by I knew every house in the district. I can remember when most people were so poor they had to use overcoats as blankets. People are far, far better off now.” Mr. Wyatt’s former employers, Thedwastre Rural Council, have their offices in Elmswell, and because of overcrowding the council is going to spend £5,000 in extending them. The council is also a big employer in Elmswell with over 50 people on its payroll.
POP GROUP
Elmswell also has its own pop group called Nelson’s Column, which has been in existence for 18 months with the present line up. This five-man combo regards itself as an Elmswell group although it plays over an area of about 200 miles. The group consists of John Snell (25), who doubles on tenor sax and flute; Roger Lambourn (24), bass guitar and vocal; Julian Keeble (19), lead guitar and vocal; John Barron (19), drums, and Terry Bishop (20), organ. The group aims at versatility. “We play a lot of standard tunes as well as up to date pop songs,” said John. “What we want to do this year is to get on the television talent programme Opportunity Knocks and then possibly turn fully professional.”

St Edmunds bacon factory employs over 500; 130 of these live in Elms well. It was formed in ? and is a unique concer… that it is a farmer-owned co-operative. Annual turnover is in the region of £3½m – last year was the worst in the factory’s history.
Made loss
Due to an outbreak of food poisoning, the factory was closed for a time and made a loss of £4…? over the year. But the factory is expected to come back with a vengeance this year and produce a large profit.

Hawes the printers is tucked away opposite the council offices and is another old established village business. In fact it was started only a year before Bacon Factory – in ? – by the grandfather of director David Hawes. 1945 it was only a father and son firm, but now has a staff of 50. “And it is our intention to expand,” said Hawes.

The plague
Centuries before Elmswell was an industrial village it was stricken by Black Death and this explains why the fine medieval church which stands on a hill is somewhat isolated. The village was once centred around church, said the Rector the Rev Alec Colson. But everyone moved away cause of the plague. The church tower with its beautiful flint decorations is regarded by some authorities to be the finest in the country. Mr Colson, who was an army Major before entering the church has been at Elmswell six years. He is a great believer in taking the church to the people. “I would like to see the church growing in people’s homes rather than just having rows and rows of people in church.” 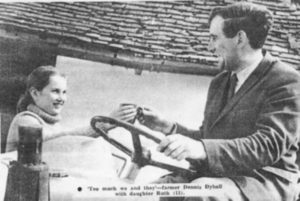 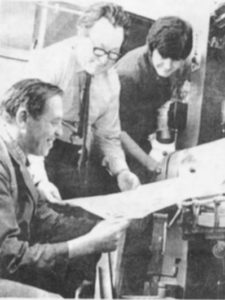 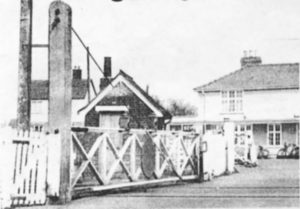 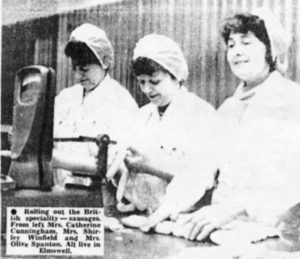 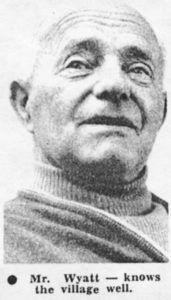 A pride of printers. . . The village firm of Hawes has hopes of expansion. In print about print are (from left) Peter Palmer, director David Hawes and machine manager Nigel Berry