EVERY PICTURE TELLS A STORY

Although it may not happen as often as it used to, most people like receiving postcards from friends and family as a reminder of journeys made and holidays enjoyed. It is also a way of keeping in touch, without having to write a (long) letter. Postcards make colourful displays and, for those of us whose photography leaves a lot to be desired, it is a good idea to bring some of them home to keep for ourselves. In these days of the internet, however, we can have photos and live pictures sent to us before the holiday-makers have actually left for home! This is reassuring for parents whose children are on gap years travelling abroad, but may prove to be the demise of postcards in the future.

One resident of our village has collected postcards for many years now. Few of his postcards are in colour, they don’t feature countries abroad, but the majority have interesting messages on the back. Paul Peachey collects postcards of Elmswell, the village where he was born. We are lucky that he has shared some of his cards with us and they have been published in the newsletter, in the local press and on the Elmswell History (web)site, evoking memories of the past for many people.
A Villager Born and Bred

Paul was born at his maternal grandparents’ farm opposite the church at Bunker’s Hill, where his father worked. The work was hard, the hours long, and seemed to have instilled in Paul a strong work ethic (more of which later). He went to the village school, which was situated at the back of Pightle Close, set back from School Road and where Old School’s Court now is. The only remaining part of the school is where the playground was. Three generations of his family attended there – his mother Betty, his wife Gill’s mother Margaret, Paul, Gill and their daughter Lorraine (for one year) until the new school was built at its present site (in Oxer Close). Betty was a school cook there too. Paul was in classes with Gill’s sisters, and Gill’s family lived at the farm in Tostock (where they have the car boot sales now). They had to go to school by bus, which they caught at the Fox & Goose pub. Gill and Paul remember the teachers and headmaster who worked there – Mr Kirby (the Head Teacher) and Mr Proctor both lived outside the village, but the other teachers – Miss Goddard, Mrs Hurrell, Mrs Monk and Mrs Stanners – lived locally. On Paul’s walk to school, he and his brother, David, would stop at the tin shop opposite the Fire Station to buy sweets. Gill remembers walking along the path by Hanover Court, where there were three shops, one of which was a wool shop. The shops are long gone and have been converted into a row of houses.
First Signs of an Entrepreneur?

Paul’s first job was at 12, when he became a paperboy for Mr Leeks who ran the Post Office and store. He did this for about three years, delivering papers from the Shop Corner along the Ashfield Road. Later on, he took on a second round, so he would come back and deliver to houses in New Road. He would start at 6.45am and it would take him half-an-hour. Sometimes it was still partly dark when he left his home on Church Road to collect his papers. Probably not good on a cold, winter’s morning!

At 13, Paul took a job working for Mr Goodfellow, the butcher, who owned the buildings around where the present butcher’s shop is. On a Saturday, he would complete his paper round, go home for breakfast and then go to work at the butcher’s. He had a trade bike and he placed the wrapped up meat on the front and back in a basket. He also had to carry a satchel, in which he put the money he collected. He remembers a particularly vicious dog at one of the houses where he delivered. One day, attracted to the smell of the meat, the dog managed to get free and bit into the back of Paul’s leg. After finishing his round, Paul would go back to help clean the butcher’s shop and wash down the windows. He also helped make the sausages and mince.

At 14, Paul went to work for David Hawes at his family (printing) firm, W.W. Hawes (in Cooks Road). He used to do bindery work, sweeping and collecting up paper, wrapping up parcels, and any other jobs that needed to be done. It was suggested that Paul should do an apprenticeship – in those days it took seven years – and this meant he had to attend Norwich City College on what was then called ‘block release’. At 17 he had to leave Elmswell, travel to Norwich (by train) and stay there all week, which must have been hard in a strange city, on his own and having to learn so many new things. By the second year, Paul had a mini (the favoured first car for most of us!), and his mum was teaching him to drive, so he could drive to Stowmarket Station and come back each evening.

On finishing his apprenticeship, Paul became an Administrator and then Assistant Manager, and did two years as a Rep. He remembers his first company car was a beige Ford Escort 1.4. Having been trained so well, the time came when Paul felt ready to start his own business, and he set up Falcon Print & Promotions with his business partner. For six months he worked from home and then moved to St John’s Street (in Bury), then to nearby Moreton Hall, and 28 years on, they operate from Woolpit Business Park.

Ironically, Gill also worked at Hawes, although only for a year as she then went to work at Margaret’s, the hairdresser in the village. This was owned by Margaret Goodfellow, the butcher’s daughter, and began in a tin hut by the butcher’s, moving to its present site, which had been a cobbler’s shop. Gill worked there, married Paul, and then left to have their children, Lorraine and Michael.
The Start of Paul’s Postcard Collection

Paul started collecting postcards 25 years ago when he met a couple on holiday in the Canary Isles. They were from Kent, and the husband collected cigarette cards. There was an antique fair at Woolpit so they went there looking for cigarette cards with Paul, where he found two postcards of Elmswell. And, as it says in a newspaper article on Paul (Bury Free Press, Oct 1996), just from that find “he was hooked”. Since then he has travelled to fairs all over the country, from Carlisle to Birmingham, London to Plymouth, to name but a few. There are far less cards around now. Bury St Edmunds and Norwich has a fair only once a year, so cards of Elmswell are pretty rare. This year, at the antique centre in Needham Market, Paul found a postcard of Elmswell. A week later he got a card on eBay. One of the postcards published in the newsletter came from Belgium, having been sent to France – this also came from eBay.

Paul now has 160 postcards and many doubles, but there are still numerous postcards that he would love to get hold of. Needless to say, his favourite card is of his birthplace, Bunker’s Hill Farm. When I was talking to Gill and Paul about their experiences as they were growing up in the village, they were able to produce postcards to show what they were talking about or where buildings had been. We looked at postcards of the old school, and they were able to explain where the different classrooms were. The pictures are particularly precious now that the buildings are gone. Many of Paul’s cards date back to the early 1900s, and he patiently explained to me (brought up in London) how, when the roads where dirt, they had to be swept of horse droppings every day. His cards are fascinating as they are a record of how the village has changed and evolved over time. Gill and Paul can tell you so much about each of the pictures because, even if they don’t have a memory of it, they can recall what their parents and other people in the village have told them, whether it’s about the building or the people who lived or worked there. Whenever one of Paul’s cards is published in the newsletter, there is usually someone who will get in touch and let us know what they remember about it, and we do like to hear from you.

Interestingly, Gill also collects postcards. Her collection is of Suffolk churches and she has 400 – there are over 500 churches in Suffolk – so, between them, Gill and Paul have a lot of albums. We didn’t really talk about the prices that they paid, but as the cards become rarer, like anything that is sought after, they become more expensive. Something that also interests me is the postcards with messages on the back, such as the one of Elmswell Post Office. It provides a little snapshot from someone else’s life, and I like seeing the beautiful handwriting as well. In past editions of the village newsletter, Paul has appealed for anyone who can help him add to his postcard collection. There are still many more he would like to track down and, if we all keep an eye out, we might be able to help him find them, especially as Paul plans to publish a paperback book on Elmswell postcards through the 20th century when he retires.

23rd April 2015 – Paul himself has subsequently added the following:-
I joined W W Hawes in Easter 1969 at the age of 15½ as a Bookbinder and worked a six-year apprenticeship, travelling to Norwich City College. This was on a block release, based on 3 x 3 week periods throughout the year, passing my intermediate and final exams as a bookbinder. We did not do any bookbinding at Hawes, most of my time was spent on the guillotine, folding machines and bindery line.
On my first official day at work, David Hawes asked me to take the mail up to Elmswell Post Office on an old trade bike. On the way back the bike collapsed, and that was the last time the bike was used!
At 22, I moved into the general office as an order clerk under Stan Halliday and David Hawes. This was after six-months’ work experience on the printing machines, litho room making plates, and typesetting room.
Two years later I was promoted to Assistant Manager and, during this time, I did an evening course for estimating at Norwich City College again.
Within two more years, I moved into the role of company representative and covered East Anglia.
During the time I was there we had printed Dulux colour charts, Sainsbury labels, Kitfix hobby boxes, travel brochures, monthly Goat Magazine, Council voting Ballot forms, Draw tickets, posters on the big poster press and much more.
Remembering the year of the Coal Strike in 1984-5, Hawes had to work unusual shifts to make the best use of the electric to get the printing out. This meant starting in the early hours of the morning and finishing off at lunch time. One of the reasons I remember this was because Ipswich Town played Birmingham City in the League Cup and had to kick off at 2 o’clock during the week so as not to use the floodlights. 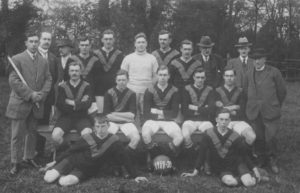 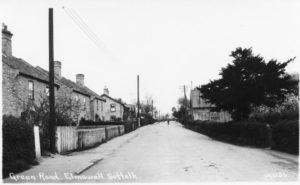 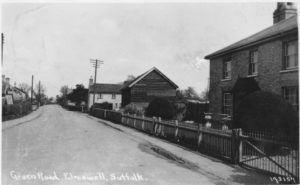 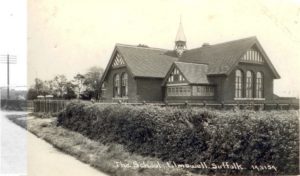 School, 1935 Elmswell Primary School: it was the worst thing that could happen to Elmswell when they demolished it in 1986; I went there, as did my brother, daughter, Mum, wife, her mum… 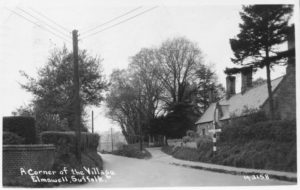 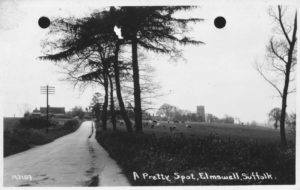 School Road (west) Bottom of School Road with church in the background. 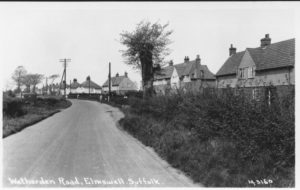 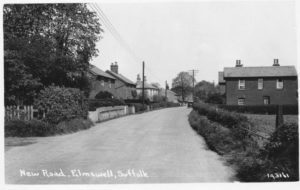 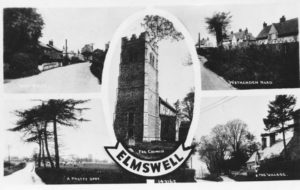 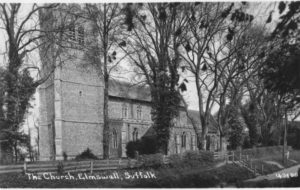 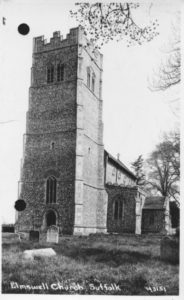 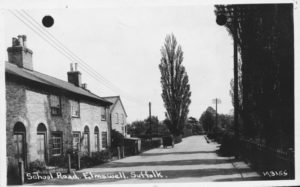