Article in the Bury Free Press, 6th January 1978, reprinted by permission
The day the bacon factory opened
Scenes from the great day when Elmswell bacon factory opened bringing new jobs to the village. The pictures show the committee and the architects who designed the factory. The inscription on the stone says it was laid by the Marchioness of Bristol on May 30, 1911, the coronation year of King George V.

More than 70 new jobs are to be created under a modernisation scheme worth nearly £½ million at a local meat processing factory. St Edmunds Bacon Factory Ltd, at Elmswell, plan to recruit typists, process workers, technicians, salesmen and managers, over the next three years. The jobs expansion follows a grant of £444,330 from the EEC’s agricultural fund for expansion and modernisation of plant. The grant is the third largest amount to be allocated to the 35 successful companies in England and Scotland during 1977.
HYGIENE
Most of the money will be spent on bringing the factory into line with strict EEC hygiene regulations. The firm is planning a full re-organisation of the slaughter hall. Modern equipment will be introduced, the walls will be covered with a special paint and a new animal reception area will be built. In the second part of the improvement scheme the company is planning to provide a 150,000 sq. ft. extension to the manufacturing unit and to double the size of the cold store to 80,000 cubic feet.
LABORATORY
One of the highlights of the development is a two to three storey laboratory designed for the testing of products and research. Work has already started on the 4,000 sq. ft. site and the laboratory is scheduled for completion in 1981. Mr Mark Moorfoot, the firm’s commercial director, said: “We are obviously very pleased. It means we can go ahead with full expansion and offer a secure outlet for pig producers.” The company operate from a 36-acre site off Ashfield Road, Elmswell, and employ a staff of 375.
PROCESSED
More than 2,800 pigs are received each week from local farmers. The animals are slaughtered and then processed to provide supermarket chains and local butchers with sausages, cured ham and bacon. The grant marks a dramatic upturn in the fortunes of the firm. Four years ago it ran in financial difficulties and was forced to make part of its work force redundant. In 1974 the factory was taken over by the Eastern Counties Farmers group who introduced a tough rationalisation policy. Since than profits have soared and the company has achieved success both at home and abroad.

The opening by MP Mr Eldon Griffiths of the manufacturing hall at St. Edmunds Bacon Factory, Elmswell, is another milestone in the company’s recent revival. In the early 1970’s the company appeared ill-prepared to meet the vigorous competition of the European market and St. Edmunds plight was worsened by soaring production and distribution costs. Eastern Counties Farmers Limited acquired the business in 1974, since when the staff and management have worked extremely hard to put it on a sound operating base. Many product lines were axed and trade with certain supermarkets was extended. Over the last three or four years substantial losses have been turned into reasonable profits and the company is now involved in a massive modernisation and expansion programme. New EEC regulations for slaughterhouses demand high standards of construction and it is towards the attainment of EEC status that much of the building programme is directed. Already, substantial works have been completed to provide new drainage and electrical distribution systems, and current works include the re-building of the lairage. The major phase of redevelopment so far is the manufacturing hall which houses smoke stoves, bacon freezing facilities, five bacon slicing and packing lines, two fresh pork packing lines and a large cartoning area.
SALES
The portal frame building allows flexibility for future modifications to cater for changes in market requirements. The standards of finish in terms of wall and floor surfaces, lighting intensities and air conditioning are all to EEC standard to provide the possibility ultimately of exporting British bacon to Europe. The factory now slaughters nearly 3000 pigs per week. Almost two-thirds of the products are sold to major supermarkets including Marks and Spencer, Safeway and British Home Stores. Sales to smaller shops and catering establishments are made through a van sales fleet based mainly at Elmswell with a small depot in London. St. Edmunds’ now employs just over 400 people and there are continuing opportunities for new jobs as the business expands.
BONUS
Highly competitive wage rates are paid and in addition there are substantial bonus payments. Overtime and weekend working is available and the company offer varying hours in some sections to cater for mothers with children at school. There is also an evening shift from 6 pm to 10 pm five nights a week for housewives looking for a supplement to the family income. Three buses provided by the factory bring in workers from a wide area for normal hours which are 7.30 am to 4.30 pm and a staff shop gives all workers access to company products at subsidised prices.
SECURE
It is heartening in these days of industrial and economic uncertainty to see this local business succeeding and indeed expanding to provide secure employment on the one hand and an independent outlet for farmers on the other.

• MP Mr Eldon Griffiths chats to some of the ladies from the factory’s pre-pack department.

• [below] The new bacon packing department

More pictures taken on this occasion but not included in the BFP article: 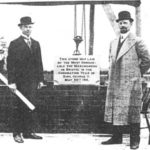 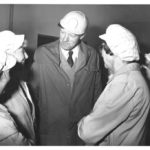 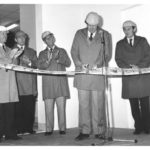 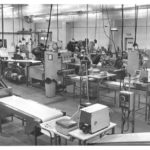 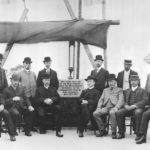 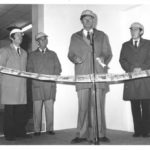 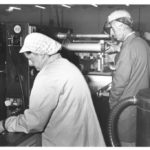 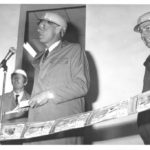 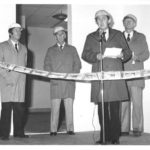