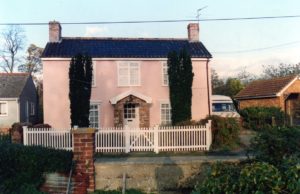 Letters to EHG’s Secretary from Albert (living in Tostock) in 2018.

[Albert kindly contacted EHG after having read Mark Houghton’s article in the Elmswell newsletter of April 2018 – http://elmswell.suffolk.cloud/assets/Newsletters/2018/April-2018.pdf .      At that time, Albert was 97 years of age, profoundly deaf and somewhat disabled after having had a serious operation on his throat.   However, there’s nothing wrong with his writing and sense of humour.    The additional text in italic and square brackets have been added, for clarity.]

Further to the article in the last Elmswell newsletter, I feel I have a vested interest.  On page 16 the article by Mr Houghton re his father being evacuated to Elmswell during the last War – I see that gentleman lives at Buckhurst Hill in Essex.   My wife and I moved to Elmswell in 1971 from Buckhurst Hill.   My wife, sadly has passed, taught backward children at Beyton School for about 16 years.  I think she was well known in Elmswell as Mrs Bryan and to the staff as Trixie.  As I had been made redundant and was temporarily unemployed, I looked around at properties with a view to buying one.  Sure enough, a lovely four-bedroomed house appeared in an estate agent’s office in Stowmarket at £4,995.   It was Yew Tree Cottage in Hawk End Lane.  This I think was the house that Mr Houghton’s father was evacuated to during the last War.  The owner then was a Mr and Mrs Nicholls.  The fact that Stanley King used to slip in there to watch television, that was Stanley to a T.     [See more info about Yew Tree Cottage and Mrs Julia Nicholls, including photos, elsewhere on this website.]

When we moved to Elmswell in 1971, it was still a great village and all appeared to speak with a Suffolk accent; it’s no longer a village but a small town.  Back then there were at least five local businesses employing local people.  They’ve all gone.  There were some lovely characters in the village then and, no matter what you wanted, there was a person that could get it for you.  Sadly Elmswell will become North and South Elmswell divided by the railway.  The biggest problem will be the motor car.   Sorry to end on such a pessimistic note.

Many thanks for letter.  Apologies for the delay in answering.  Please feel free to use whatever I write to use as you like.  If you are contacting the gentleman who wrote to you re his father’s sojourn at Elmswell during the last War, you might care to send him the enclosed view of Yew Tree Cottage.   I’m not sure when the old one was taken [circa 1910-15, see elsewhere on this website, Nina Ashman’s memories and others, under Hawk End shops.] , but the lady is Mrs Nicholls of blessed memory.  The [other] snap [shown above] I took around 2000.  My late wife and I toured extensively in the motor caravan that you can see parked at the side of the house.    I had been thinking of writing about my experiences of moving from Buckhurst Hill to Suffolk.  What do you think?

[Albert was contacted again, and this is what he wrote about his time in Elmswell]

My arrival in Elmswell was not as an evacuee (as a recent subscriber was) but more a refugee.   New and cheaper methods were being explored, particularly by Fleet Street.  Although newspapers were relatively cheap to buy, production costs were pretty steep.  When a new method of setting type electronically was introduced, over night Fleet Street vanished to the Canary Wharf in the East End of London, in the old West India Docks.  From being manager of a Department with 38 staff, I was made redundant with 38 staff.  The unions, in their wisdom, said workers will fill jobs first and managerial members last.   Jobs were short in the London area, so it looked like a long wait for a job.  I knew no other work as I was an indentured apprentice at 16 for five years in the pre-print skills of the industry.  My wife, sadly no longer with us, said “well, I’m a teacher” and teachers were in demand during the summer and autumn of ’71.  Sure enough, in the Times Educational Supplement was a teacher vacancy at a Middle School at a little village called Beyton.  We came to Bury, my wife was interviewed and got the job.

The next problem was moving from Buckhurst Hill to Beyton.  As we were leaving the meeting, a member of the interviewing committee asked my wife “would or did we have anywhere to live when we moved into Suffolk?”.  The answer obviously was “no” [as] we didn’t know if my wife would get the job or not.  “Would you like the Headmaster’s House?  It’s empty and in the school grounds.”   Would a donkey eat oats??!!  So we arrived at Beyton, moved in and were set for the autumn term of 1971.  We spent nearly a very happy year [although] I was still not working and had to travel to London each week to receive my unemployment pay from the Union.   No matter how high you rose in the print [trade], you had to be in the Union, thus you were entitled to umemployment pay, but you were always well down the line for re-employment.  In the spring of ’72 I discovered Stowmarket and, in the window of an Estate Agent was a picture of a four-bedroom cottage in Elmswell for £4,995 – yes, that’s right, £4,995!  My wife, Trixie, liked it, we payed cash for it and moved in in Autumn 1972 – we really felt we’d arrived.

Elmswell really was a working village when my wife and I arrived.  There was the Bacon Factory, Thurlow Nunns in Elmswell Road that sold everything from a tack to a tractor, and the staff were very helpful, an Engineering Works in New Road, a printing company in Cooks Road, and Bakers Mill.  Shops – there was no Co-op; the shop was where the Post Office now is.  As you went in the door the P.O. was sharp to your left.  They had another outlet facing the Fish Shop which was a little tin shed.  Macie’s was Kings Store run by a charming couple named King!!  There was a butcher’s and hairdresser’s next door.   Somewhere along the thick hedge at the road to the old Bacon Factory was a shed where often a barber appeared to do hair-cutting.  Where Mill Gardens is was a funny little brick bus shelter-type structure called Kays that sold provisions, etc.   There was only one village pub “The Tavern”.   If you were a regular drinker you didn’t use the “Fox”; the Railway Tavern [was] where all the Elmswell characters could be found – Ronnie Miller, Spot Roper, Pat Eke of blessed memory who sadly was killed at the Wetherden junction with the A45 now A14, Arthur Elliston who supplied the local area with logs for their fires.   [Also] little Georgie Bruce who glared at me one night in The Tavern, till I asked him what was wrong.  “You’re sitting on my stool” he said.  A brief apology, a pint of beer, and we were friends and I was told that I could sit on his stool whenever I wanted to!   He was one of the brave characters that spent part of the War in a Japanese Prisoner of War Camp.   There are many more I could name, sadly most have passed on.

Elmswell really was a village and my wife and I were lucky to have been accepted.  Stanley King was another great character.  If you wanted to know something, ask Stanley.  He and my wife, with others, sang each Sunday in St John’s Church choir.   The Choir Mistress was Eve Armstrong [and] her husband, Bill, was Parish Council Chairman for many years.   The Council met at the Village Hall which stood where the Library now is; there was also a beautiful Bowling Green there which, of course, has disappeared.

The village had a proper signal box and proper level-crossing gates, where there was a signalman on duty 24 hours a day and he had to open and shut the gates day or night.  At the bottom of my garden in Hawk End Lane was a signal gantry which had a signal on the Ipswich side and, often during the night, I would hear this crash down as a goods train was coming – it was surprising how it sounded during the nights.   I remember one night saying in the The Tavern “where could I get a pair of pheasants to send to a friend in London?”    “Don’t worry” said Pat Eke.   Next morning a pair of pheasants were hanging on my kitchen door.

The day we officially moved into Yew Tree Cottage, a neighbour, Charlie Capon, dragged over a sack of coal [saying]  “there you are, boy, that’ll keep you warm till the coalman comes”.   Sadly those days have gone of village life.   I’m glad I lived to see some of them and that my wife and I were accepted wholeheartedly into the community of Elmswell.