Betty was born in Creeting St Mary on July 2nd 1930, daughter to Tom and Daisy Woolnough and sister to Ted. In 1935 the family moved to Bunkers Hill Farm, a council-run farm at the time.

She married Laurence Peachey from Thurston at Elmswell Parish Church in March 1951; after their marriage Laurence helped Tom run the farm, along with Bob Manning. They had two children, Paul and David, and after Paul’s marriage to Gillian Borrett, the family had an addition of two grandchildren, Lorraine and Michael.

Both families moved out of Bunkers Hill Farm in 1959 to purpose-built bungalows in Church Road. Tom and Daisy moved into Red Roof and Laurence and Betty to Kanzan. Betty took a job working as a cleaner at Elmswell Hall for Mrs Chapman, for 18 months. She then moved to Elmswell Primary School where she worked for many years, starting as a dish washer before getting the job she loved – Assistant Cook under Doreen Pratt. In the early 1980’s Betty moved to Thurlow Nunn’s in Ashfield Road as a cook. 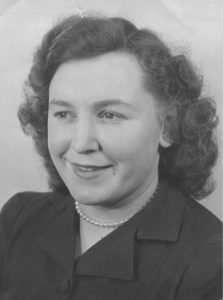 One of Betty’s loves was watching Ipswich Town Football Club, starting in 1967, and she was a season ticket holder until illness stopped her going in 1987 (she watched the club lift the FA Cup in 1978 at Wembley). Betty also helped the ITFC Supporters Club (Elmswell Branch) when they organised testimonial dances for players, and much enjoyed catering for these events.

Betty helped at the over-60’s Club (now known as the Helping Hand Club) for a number of years, raising funds by organising many trips and functions. She was also a helper for the Meals-on-Wheels delivery team and member of the old Village Hall Committee. When her sons played cricket for Elmswell she was always on hand to help out with the cricket teas.

When Betty died in 1989, the over-60’s organised a large blue table cloth to be embroidered with her name. This was to commemorate her life and help to the club over the years she was involved…… the tablecloth is still used at meetings today.