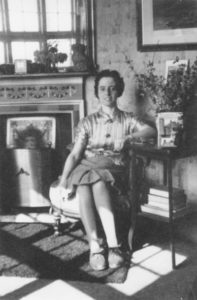 Dora in the “front room” at 20, Wetherden Road, perhaps showing off her engagement ring.

Dora was born Dora Lily Manning in August 1918 at 20 Wetherden Road, one of a family of eight – 3 girls and 5 boys – along with her twin brother Dick.

Leaving the local school at 14, she went into service at St John’s House in Church Road but returned to the family home in 1935, aged 17, to look after the family following the death of her mother. By then her two sisters had left to go into service in London.

At the beginning of the War, Dora met Hugh Handyside who was stationed at Haughley Park and they were married at Elmswell Church in March 1943, but, after just four weeks, Hugh was posted to North Africa and Italy. Dora then worked for Mr Leeks at the Post Office, still living at 20 Wetherden Road, where their son David was born in 1948. The family transport was a motorbike and sidecar… and Dora’s bicycle. Following a period living in Bury and Great Ashfield, during which time daughter Ann was born, Dora and Hugh moved back in 1960 to School Avenue where, in 1967, Hugh died leaving her with little money and 2 young children.

Back to the Post Office, and to the paper deliveries for Mr Leeks and, in 1971, for Tony Green; relief Postwoman, paper girl, scrubbing the shop floor, babysitting for the boss’s five daughters… and inevitably falling asleep whilst doing so! 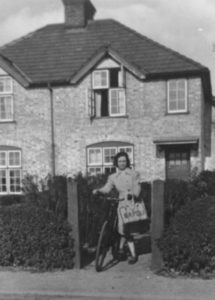 Dora with her bike outside 20 Wetherden Road…. some time ago! Note the bag, from when Hugh was stationed in Italy.

Time passed but Dora never stopped. She loved her family, now spread as far away as Australia where, in 1992, she flew to visit them – her first time abroad. She never stopped until her sudden death at home on 8th September. You will have seen her with her beloved bike, from 6.00 am until dusk, delivering post, papers – and our Newsletter. Doing small favours, time for all, gentle and giving, no time to stand doing nothing. You may have seen her immaculately neat bungalow on Miller Close, still with her favourite picture of Rod Stewart on the wall. For Dora, great fan of the Elmswell Luncheon Club, moved with the times and retained an individualism which echoed a lively and sometimes flamboyant past. To many children growing up in the village she was ‘the lady with the purple hair’.

Dora was never an old lady. But a lady, most certainly. Her drive and spirit were not worn down by her many fruitful years. And she continued to give, to make her contribution, to the end.