Billy died, alas, before we could get an interview. He was, however, interviewed (see below) by John Eley on Radio Suffolk in about 1995.

The following two items appeared in the Elmswell Newsletters of January and April 1993: 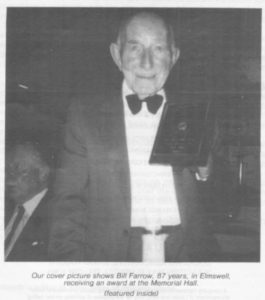 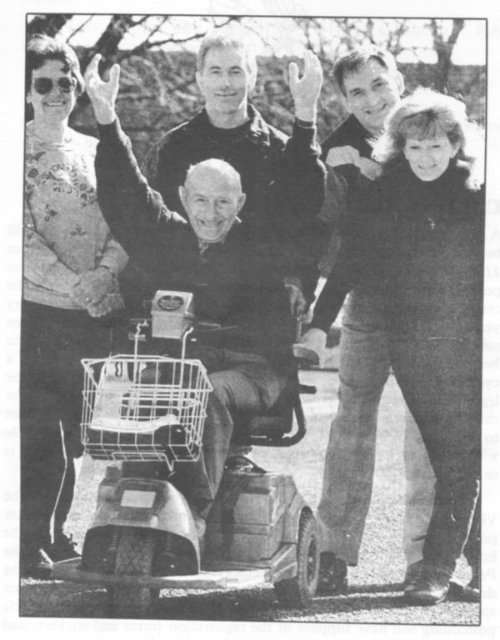 Mr William (Bill) Farrow has lived in Elmswell all of his 87 years. He was educated at the local primary school, until the age of 13. His first job was at The Grange as gardener for 14 years for Mrs Durrant, and for the rest of his working life at the Elmswell Bacon Factory.

He played football for Elmswell for many years, and was assistant Cub Master for the Elmswell Scout group in the 1920’s and 30’s. He was one of the residents of Elmswell who helped to build the Memorial Hall, which was opened in 1956. After the opening he continued as caretaker for many years. At that time the hall was used six days a week. He was one of the founder members of the Elmswell Over 60’s Club, and was a committee member until five years ago.

He has been a member of the Elmswell Bowls Club for 50 yrs. In that time he was groundsman, then later became Chairman, and on to President. He had to end his playing career because of ill health.

Bill Farrow, 87, celebrates a trial run in his electric wheelchair. Crippled by arthritis, he will now be able to get about the village on his own thanks to an energetic campaign to raise the £2,000 necessary to buy the state-of-the-art mobility aid. Campaign organisers Chris and Des Bevan are seen with fellow fundraisers Roy Finch and Muriel King. Bill will have the chair for as long as he needs it and then it will go on to another person in the village who needs it.

Bill Farrow, one of our most senior of senior citizens was the first to come forward with an offer to sponsor a seat at the new bowls green on Blackbourne. A lifetime member of sports clubs in the village and a great ‘contributor’, Bill is seen here unveiling the seat ready for use.

Lifetime member of Elmswell Bowls Club 91 year old Bill Farrow bowled the first bowl of the 1997 season on Saturday 26th April. This was made possible with the loan of special bowls wheelchair from Mid Suffolk Indoor Bowls Club. It was the first time Bill had been on the new green. Well done Bill.

Interview, 1991
These notes are compiled from a transcript, not necessarily in the original order

Billy was born in Elmswell on Boxing Day 1905; he was the third of 6 children – 3 girls and 3 boys. His father was also Elmswell-born, but his mother was from near Newmarket and was probably in service in Bury when they met. Dad worked at The Cottage, 7 days a week looking after the pigs, bullocks and poultry and tended the garden – he was lucky to get 12s a week when he married, as a stockman (an ordinary labourer got only about 8s/week). He was never afraid of work, and would do odd jobs for a few shillings. Sometimes he made rugs of rags – 5s a rug. He never struck the children, chastising them by word only.

Young Billy enjoyed his days at school. Mrs Wilson was the Head, and her husband also taught there – they lived down the bottom of ‘this road’ (Wetherden Road??). The classes were often large: 20-40 children of many ages in one class, with a single teacher for all subjects. There were 8-10 garden plots, 2-3 boys to a plot: Billy was put in charge of the school garden and had to dole out the seed. Here he became a keen gardener, and had much satisfaction from what he grew.

During the war, their schoolmaster was an officer with the local volunteers, and he’d practise his training with the boys during playtime, marching about the school yard with poles for rifles. They used to play football and cricket on an ordinary open meadow {Pye’s Meadow, I presume} where the Blackbourne estate now is.

Outside school nothing much was provided for their amusement, but they played football (they might have to make a ball out of rags or blow up a pig’s bladder). They had spinning tops, and hoops, and played cricket on the road, using bricks for stumps – there was not much traffic about. Cricket was popular for inter-village rivalry, rather than football. Sometimes a few lads would walk to Stowmarket with 9d each – 6d for the pictures and fish+chips for 3d. at Wildings Fish Shop.

Billy recalls that the local bobby was PC Lilliston at this time.

He left school at 13 in the last days of WW1, having permission to leave early because he had found a job as gardener at The Grange: he stayed for 14 years. At first there was another gardener, but when he went Bill became the senior. The boss was Mrs Durrant. Her husband was a much older man: he had been a bachelor having business (a press?) in London, and living with his mother, but when the latter died he married his secretary and came to live here. Bill was paid 8s/week, and gave his mother 7/6 keep. He was glad to run an errand for a penny or two, to get more pocket money.

In his spare time he played cricket with the scouts, football for the village team, and won a Stowmarket League medal at 17. He was in the Scout football team until ‘too old’ (30-plus), and played a bit of tennis up at the Rectory.

He only had 3 jobs in his life: he was made redundant from The Grange when changes in taxation made it more expensive to have servants, and he ‘went on the land’ for 2 years, working for Farmer Kemp up Ashfield Road, mostly growing veg and fruit. There were a ‘good crowd of working lads’. Then one day the accountant at the bacon factory offered him a job, so he tidied himself up and went to see the manager – ‘You can start tomorrow morning!’.

He met a girl who lived with her mother in New Road, and they were married in Elmswell Church on 27 April 1937. They moved into a little cottage opposite the chapel (in School Rd); buying essential furniture for the whole house cost them £43, all delivered. They had a daughter (who lives in Wilts) and a son (who lives locally). His wife had got used to town life during her service years, so wanted to move to Bury, but he refused. Says Billy: “Elmswell is still a wonderful place to live, and I wouldn’t want to be anywhere else. I was always a country jolly – you can’t beat the country life, the fresh air, the fresh livin’.”

He worked at the bacon factory for nearly 40 years – 37 years full-time and 2 part-time, 7:30 am to 5:15pm weekdays and to 12noon on Saturday. He felt lost at first, and didn’t eat for a week (because of the meat smell, and being unused to working indoors) then he pulled himself together. His first job was in cold cellars in the curing section; later on he was several years doing the pig-scolding, 5-6 pigs to a tub. After he slipped and suffered a hernia he was off work for a while, and went back to lighter work – slicing bacon in the pre-packing dept. Then he transferred to the cookhouse and cooked 300-400 hams a day. During WW2 he was exempt from army duty because of being in the food trade, but he was in the Home Guard, doing first aid and rescue duty.

He told John Eley something about the Bacon Factory:

It was a farmers cooperative: they’d buy pigs in and slaughter them, making hams and chaps, green and smoked bacon, sausages and pies, to send all over the country
Not much was wasted – even the bristles were dried off and sent to a brush factory. Blood and bone were boiled and ground into blood meal and bone meal.
They used the Wiltshire system of curing bacon, not Suffolk curing;
They used to sing at work, the gang in the slaughterhouse with their knives, all cheerful! But not these days, ‘always scrapping for bonuses…’

In the interview we were told about his long service to the bowls club (see article above) which began when he started mowing the green for them in 1940. He told of the many village changes he had seen, particularly the growth due to the various housing estates. And he attributed the bad weather to ‘sending satellites up there’; remembers going to school through several feet of snow.

Finally, a couple of regrets: he had always wanted to drive a car and learn to swim; but alas he never swam, and only got to ‘drive’ a moped! 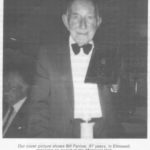 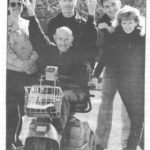 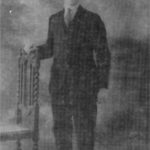 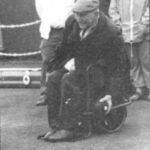 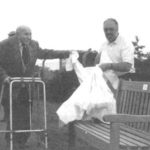